LSU vs Alabama game happening today, the rain will be gone just in time for kickoff.

Today & Tonight: Once the line of showers and storms moves through this morning we are looking at a pleasant day. Some light rain will hang around and the front breaks down across our area. Daytime high temperatures will struggle to reach 70° as the dense cloud cover is expected to stick around for most of the day. For the LSU vs Alabama tailgate conditions may be on the muddy side. The Capital area has been battling drought conditions and all the rain did us a favor this morning. By kickoff the forecast will be pleasant with temperatures in the high-60s. We will get a short break in the cloud cover during the afternoon hours, but it will still be humid. Overnight we will be sitting back into the mid-60s, dense cloud cover will return back into the forecast. 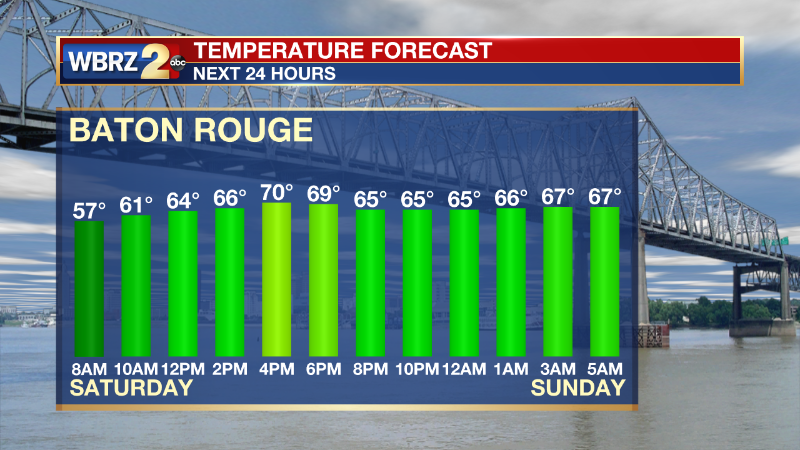 Up Next: Sunday will be a more pleasant day. Waking up you can expect to see partly sunny skies. The cloud cover from Saturday night will stick around in the forecast on Sunday. Temperatures waking up with be muggy and in the mid-60s. Throughout the day temperatures will climb back into the mid-80s. The afternoon hours will have mostly sunny skies and a light breeze out of the northwest. As we head into the start of the workweek we will continue to see a gradual warming trend. Daytime highs will be peaking well above average for this time of year, and it will be another dry week across the Capital Area. Click here to see the 7-day forecast.

Tropical Depression Lisa is drifting north across the Bay of Campeche with maximum sustained winds of 30mph. Lisa will slow down and become a remnant post-tropical low over the weekend. 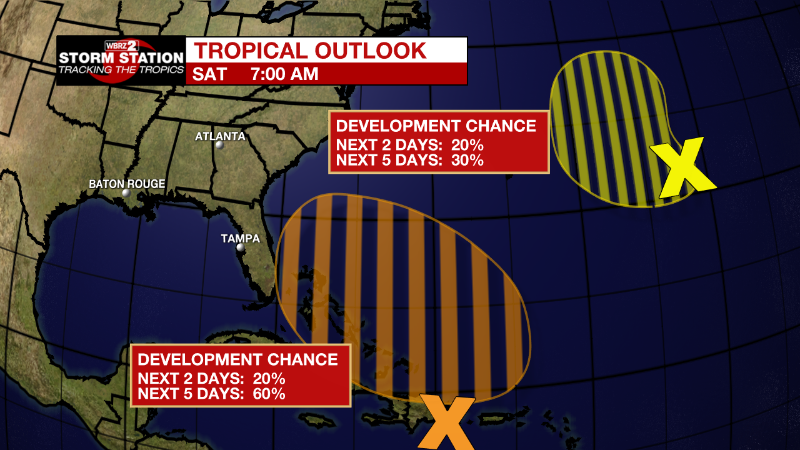 There are two other disturbances in the Atlantic that are not a threat to the local area.

Southwestern Atlantic:
A trough of low pressure located over the eastern Caribbean Sea is
forecast to move northward over the southwest Atlantic on Sunday
where a broad area of low pressure is expected to form north of
Hispaniola.  The system is initially expected to be very broad and
disorganized. However, it could begin to acquire subtropical or
tropical characteristics, and a subtropical or tropical depression
could form during the early to middle portion of next week while
the system moves generally westward to west-northwestward over the
southwestern Atlantic.  Regardless of development, there is an
increasing risk of coastal flooding, gale-force winds, heavy
rainfall, rough surf, and beach erosion along much of the
southeastern United States coast, the Florida east coast, and
portions of the central and northwestern Bahamas during the early
to middle part of next week.  The disturbance is also expected to
bring locally heavy rainfall to Puerto Rico and the Virgin Islands
this weekend.
* Formation chance through 48 hours...low...20 percent.
* Formation chance through 5 days...medium...60 percent.

Central Subtropical Atlantic:
Showers and a few thunderstorms located several hundred miles east
of Bermuda are associated with a non-tropical area of low
pressure.  The circulation of the low has become better defined
since yesterday, and addition slow tropical or subtropical
development of this disturbance is possible during the next two to
three days.  After that time, the system is forecast to encounter
stronger upper-level winds and further development is not
anticipated.
* Formation chance through 48 hours...low...20 percent.
* Formation chance through 5 days...low...30 percent.