UPDATE: I-10 West is now open in St. Martin Parish.

BUTTE LA ROSE – DOTD confirmed Wednesday it is inspecting a portion of the Basin Bridge where a fiery crash closed down I-10 for days.

Photos shared by the department Wednesday showed crews in a bucket truck, checking to ensure the bridge is safe to reopen.

I-10 UPDATE - DOTD inspection has begun at I-10 in St. Martin Parish. Check https://t.co/XMr3BW67By for roadway updates. pic.twitter.com/lTdgkZuUub

The crash was on I-10 West just after the Whiskey Bay exit.

State Police said a burned body was found inside one of the half-dozen vehicles that crashed and caught fire. One of the vehicles was a semi hauling a highly flammable marine pollutant, leading to concern soon after firefighters arrived on scene.

After labeling the situation as hazardous, the special HAZMAT crew took control of the situation and spent nearly four hours extinguishing the flames.

State environmental officials were also dispatched to the scene.

As many as five semis were seen crushed together in video provided to WBRZ by viewers and Acadian Ambulance. A smaller car was also visible – seen to be pinned under a tanker truck.

State police say the chaos began after another vehicle became disabled in the roadway because of a separate wreck. That crash led to another wreck involving three 18-wheelers and several other vehicles.

The wreckage burned from around 2 Monday afternoon to around 6 in the evening when authorities revealed they found a person’s burned remains. The victim was identified Tuesday as 31-year-old Christopher McGee, a truck driver from Youngstown, Florida.

The crash closed a 50 mile stretch of I-10 – from La. 415 in West Baton Rouge to I-49 in Lafayette. Authorities closed both east and westbound lanes over the fire and hazardous materials risk.

McGee is one of a half-dozen victims: Some flown to hospitals by medical helicopters, some rushed by ground ambulances or others who drove themselves, authorities said. At least one person was being treated for a burn injury.

It appeared, sources said, that the initial fire started from a lumber truck. The rig burned close to the truck hauling the hazardous chemicals. 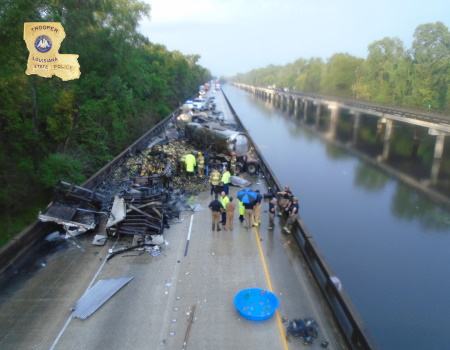 It was not immediately clear if the lumber truck was involved in an accident or if it was pulled to the side of the highway where it caught fire.  Eventually, though, there were three separate crashes at the scene involving three tanker trucks and two cargo trucks along with the small car.

Traffic headed out of Baton Rouge on I-10 West was funneled to US 190 where authorities stationed extra police Monday evening.

I-10 East was funneled to I-49 then to US 190 to make the eastern drive from Lafayette to Baton Rouge.

Click HERE for live traffic information and to review the WBRZ traffic map.