The forecast this week is more what we are used to for this time of year.

Today & Tonight: The afternoon showers are not going anywhere, but there will be a little more dry time in the morning hours. Temperatures will warm up into the low 90s before any showers bubble up. About half of the area will see some rain today. Showers are more likely for people on the west side, but still possible for all. Overnight temperatures will be in the mid-70s.

Up Next: While showers are still going to be in the forecast, overall rain coverage will scale back Tuesday-Thursday. Showers will be a bit more isolated with only about 30% of the area seeing measurable rainfall. Temperatures will trend near 90°. Heading into the weekend, rain coverage will spike back up. As of now, we are not tracking any total washouts. Keep checking back for the most updated information.  Click here to see the 7-day forecast.

Use the WBRZ WX App to stay ahead of the afternoon showers and storms. Hour-by-hour weather tracking is available for your location on the WBRZ WX App on your Apple or Android device. Follow WBRZ Weather on Facebook and Twitter for even more weather updates and unique weather insight from the whole team!

It is very busy in the tropics. Right now, we are not expecting any of these disturbances to impact the local forecast. 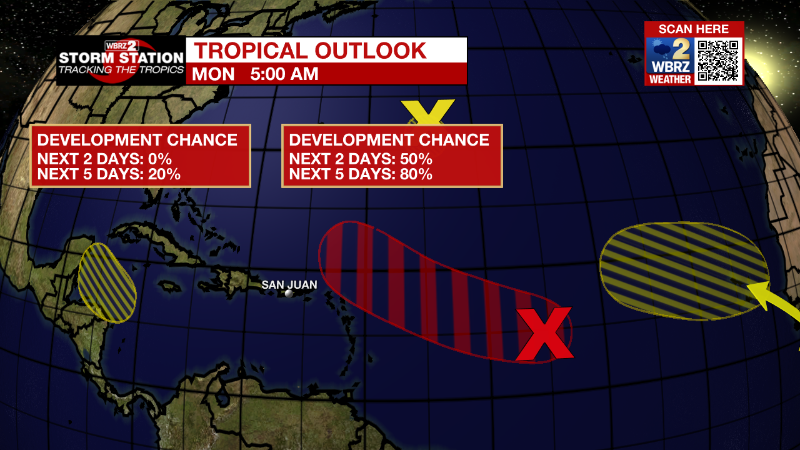 Central Tropical Atlantic:
A broad area of low pressure over the central tropical Atlantic is producing a large area of disorganized cloudiness and showers. Although environmental conditions ahead of the system are currently only marginal favorable, some gradual development of this system is expected over the next several days and a tropical depression is likely to form later this week. The disturbance is forecast to move slowly toward the west and then west-northwest at 5 to 10 mph, toward the waters east and northeast of the Leeward Islands. Additional information on this system can be found in high seas forecasts issued by the National Weather Service. 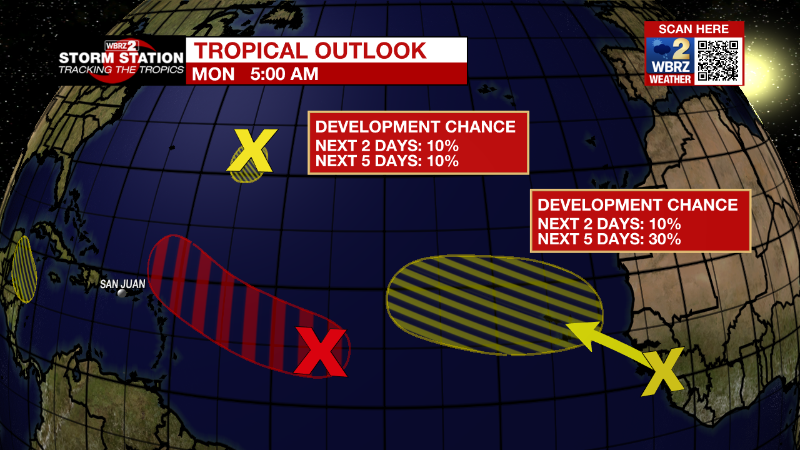 Central Subtropical Atlantic:
A small low pressure system located about 600 miles east of Bermuda continues to produce limited shower activity. Strong upper-level winds and dry air are expected to limit significant development of this system while it drifts southward over the central Atlantic during the next day or so, and the low is likely to dissipate by midweek.
* Formation chance through 48 hours...low...10 percent.
* Formation chance through 5 days...low...10 percent.