After an active Sunday, cooler and quieter temperatures are expected for much of the week ahead. In fact, thermometers could dip into the 40s a few mornings!

Sunday Storm Report: An outbreak of severe weather did indeed occur across the Gulf South on Sunday. The local area was largely spared as the outlook and atmosphere changed for the better in the local area. This change was identified and broadcast by the WBRZ Weather Team on Sunday morning—a reminder that it is important to stay in touch with the forecast as events near because changes can and do occur; in this case, it was good news. Still there were a few severe weather reports, including damaging wind gusts in Springfield and large hail in Hammond. Several large, violent tornadoes ripped through southeast Mississippi. 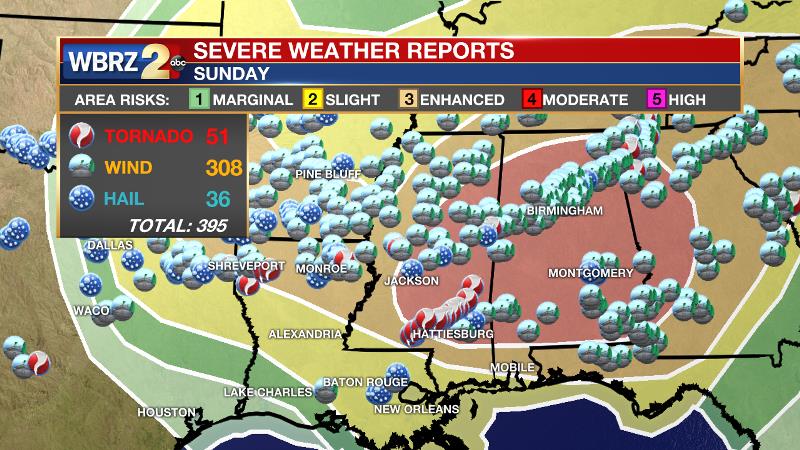 Today and Tonight: Drier and cooler air will continue moving into the local area, allowing clouds to rapidly diminish through the morning hours. This will lead to sunny skies into the afternoon with high temperatures peaking near to 76 degrees. Remaining all clear overnight, light northeast winds will guide low temperatures down to 53 degrees.

Up Next: Through much of the week, highs will stay near normal in the mid-to-upper 70s. A rebounding weak warm front will attempt to push onshore Tuesday, which could bring some spotty afternoon showers into the mix between during the late afternoon and overnight hours. The best chance of finding a shower will be in coastal areas. Once this front kicks to the south, continued cool temperatures could result in a pair of overnight lows in the upper 40s. Showers are set to return closer to the weekend. These will be associated with a frontal system that should bring isolated afternoon storms on Saturday that become more scattered in nature by Sunday.

The Mississippi River: At Baton Rouge, major flood stage continues with a level of 42.8’ as of Monday morning. The river is expected to fall very slowly through the next two weeks. The high water is primarily an issue for river traffic and river islands, although some inundation will continue for a few spots north and south of Baton Rouge that are not protected by levees. Unprotected low-lying areas will be flooded and agricultural operations will be impacted on the west side of the river. The grounds of the older part of Louisiana State University's campus become soggy. This includes the area around the Veterinary Medicine building, the Veterinary Medicine Annex, the stadium and ball fields. The city of Baton Rouge and the main LSU campus are protected by levees at this level. The level is also high in New Orleans and the U.S. Army Corps of Engineers has opened the Bonnet Carre Spillway.

The front associated with Sunday’s active weather will stall in the Gulf of Mexico on Monday, retreating slightly north on Tuesday. The may serve as a focus for a few showers to develop on Tuesday afternoon through the overnight hours—especially along the coast. A kicker front will flush this moisture south by Wednesday and the cooler air mass will become entrenched a little farther south. As a result, the coolest period of the week is expected Wednesday morning through Thursday afternoon with lows in the upper 40s and highs in the low 70s. The next frontal system will organize across the Lower Midwest and begin ton affect the local area by Friday. A slow moving warm front could provide isolated showers on Friday and Saturday and the trailing cold front will result in a better chance for showers and a few thunderstorms by Sunday.