A much anticipated cold front will approach the area on Wednesday, shifting Michael east of the local area and finally bringing cooler temperatures and lower humidity. Expect continued warmth with showers until then.

JUST IN: #Michael is now a hurricane, will be LIVE on Facebook and @WBRZ+ at 10am with an update and more on our incoming cold front. #LaWX #MsWX pic.twitter.com/HqGp7WTJeV

Tropics: Michael was named on Sunday and is set to travel into the Gulf over the next couple of days. Forecast models have come into better agreement on strength and track now that a defined center has formed. As of Monday morning, Michael was moving north at 7mph with maximum winds near hurricane strength. The storm will accelerate and strengthen to category two or three hurricane status through Tuesday night, followed by a northeastward motion on Wednesday and Thursday. Michael is expected to move inland over the Florida Panhandle or Florida Big Bend area on Wednesday, and then move northeastward across the southeastern United States Wednesday night and Thursday. On the western side of the system, impact to the WBRZ Weather Forecast area will be minimal. There may be a few extra showers around and minor coastal flooding of 1 to 2 feet in parts of Livingston and Tangipahoa parishes. A strong east wind will maintain higher than normal water levels along eastern facing shores of Louisiana and Mississippi through Tuesday and so a COASTAL FLOOD ADVISORY has been posted. 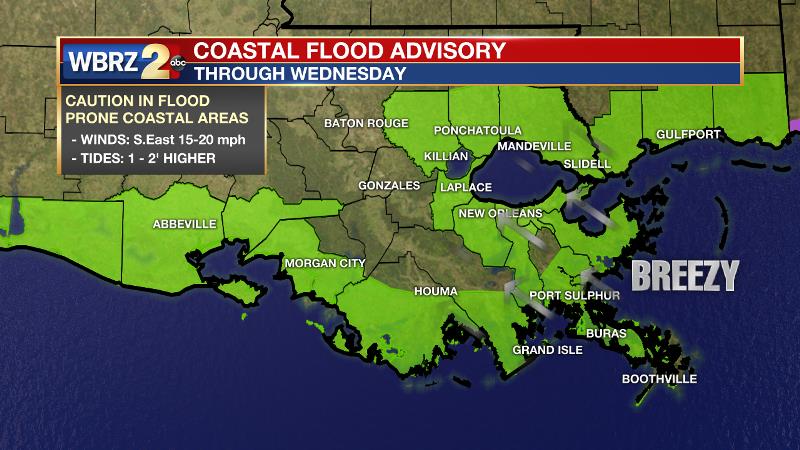 Today and Tonight: Isolated showers and thunderstorms set to return to the Baton Rouge area in greater numbers on Monday. Skies will be partly sunny early as conditions remain hot and humid. High temperatures will reach near 89 degrees with light, easterly winds. The shower machine will calm down overnight with low temperatures near 73 degrees.

Up Next: The reminder of the forecast is all about two weather systems—Tropical Storm Michael in the Gulf of Mexico and our first legitimate cold front coming from the west. This will be the first intact cold front of the season to reach the Gulf of Mexico and timing could not be more perfect! Michael is forecast to move north across the Gulf of Mexico but the approaching cold front will move in late Monday and early Tuesday, effectively changing Michael's course toward the northeast. This should result in very little impact to the local area other than higher tides for coastal areas. Scattered showers and thunderstorms will occur Tuesday and Wednesday, but action will fizzle by Thursday. The coolest air since last spring will then arrive with highs near 80 degrees, lows near 60 degrees and little to no humidity Friday through next weekend.  Full the full 7-Day Forecast, CLICK HERE.

The amplified upper air pattern over the U.S. will continue for the next couple of days with a strong upper ridge centered over the western Atlantic and Southeast U.S. and a deep trough over the Rockies. Southerly flow between these features will steer Tropical Storm Michael northward from the northwest Caribbean Sea into the eastern Gulf of Mexico. The current forecast from NHC strengthens Michael to a category 2 storm over the eastern Gulf of Mexico before making landfall over the Florida panhandle Wednesday. With this track, most of the impacts from Michael will remain east of the forecast area. However, higher than normal tides are expected so minor coastal flooding will be possible outside of levee protection systems, primarily at high tides. Increasing and deepening moisture across the region will lead to increased chances for convection Monday through Wednesday. A pattern change will occur during the middle and end of the week period as the ridge finally buckles as the trough lifts northeast and pushes a long awaited cold front through the region. In the wake of the front, cooler and much drier air will prevail for the end of the week and through the weekend. Another cold front will push across the area Sunday into Sunday night reinforcing the cooler air into early next week.