A large area of clouds, showers and thunderstorms positioned in the eastern Gulf of Mexico will influence the weather pattern across much of the southeastern United States through the week. Given a 40 percent chance of tropical development over the next 5 days, a broad area of low pressure is expected to meander in the Eastern Gulf. Regardless of development, this system will be capable of bringing heavy rain across portions of Florida, Georgia and Alabama. On the quieter, western side of the system, the Baton Rouge area is unlikely to notice any significant impact. The chance for an afternoon shower or thunderstorms may only increase somewhat compared to last week. The system will pause in the Eastern Gulf by the middle of this week before ejecting northward by next weekend.

Today and Tonight: The new week will begin with mostly sunny skies. Temperatures will warm quickly into the 80s by 10am, and reach a high of 92 degrees by early afternoon. Simulated radar suggests a shower or two could bubble up during the peak heat of the day, mainly near the I-55 corridor. Overall, rain coverage should be minimal. Clouds will increase slightly tonight, with lows around 70 degrees.

A surface high pressure system will remain over Mississippi into eastern Tennessee to start off the week, which will continue to promote low rain chances. Meanwhile, the aforementioned weak tropical disturbance will slowly spin in eastern Gulf for much of the week. The high pressure will protect the local area from showers initially, but will split and retreat to the north by Wednesday. This will open the door for the tropical disturbance to add moisture and energy into Louisiana and Mississippi through the latter half of the workweek. The result will be a continued summer-like pattern with heat and humidity and a slightly better chance for afternoon showers and storms. Still, daily measurable rain coverage is not expected to be much more than 30 percent in the 13 Parish, 3 County forecast area. By the weekend, an upper level trough will help to pull the tropical system northeastward and away from the region. 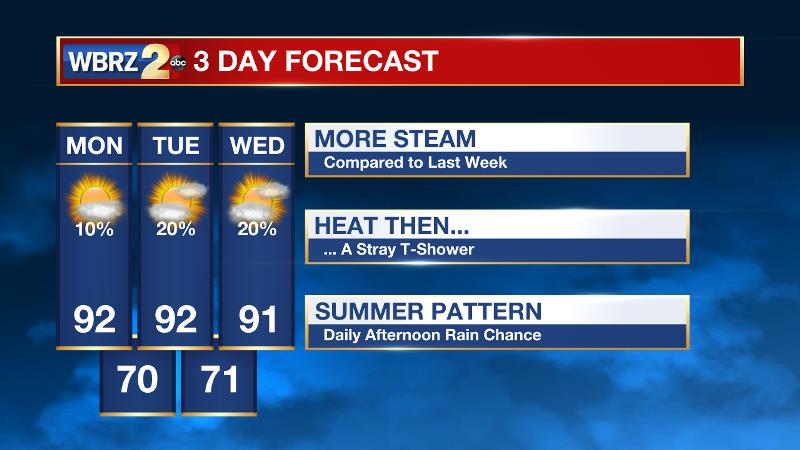 Dry air will be dominant over the Southeast U.S. through Monday. Strong suppression on the west side of a tropical disturbance in the Eastern Gulf of Mexico will limit convective development on Monday. However, by the middle of the week, rain chances will be a little higher than they were during the dry pattern experience last week.  A typical summer pattern is in store with highs near 90, lows near 70 and isolated to scattered afternoon showers and thunderstorms. The weak tropical disturbance could undergo some tropical or sub-tropical development over the next few days. A general motion to the north will continue with a pause expected during the middle of the week before the system if lifted north by the weekend. Either way, the highest rain chances and heaviest amounts will remain on the eastern side of the system and therefore east of the 13 Parish, 3 County forecast area.