Gray will be the color of the week. Expect a lot of cloud cover with times of showers and thunderstorms.

Next 24 Hours: Showers will diminish overnight but clouds will remain stubborn. Low temperatures will fall into the low 70s. Like Monday, Tuesday will bring mostly cloudy skies. With those clouds blocking out sunshine, it will difficult for heavier showers and thunderstorms to develop. Rain should be light and spotty. High temperatures will stay in the mid 80s.

Up Next: On Wednesday, a weakening front will move in from the north with scattered showers and thunderstorms. Some of these could bring briefly gusty wind and downpours. The rest of the week will then bring more gloomy conditions with mostly cloudy skies and occasional showers and thunderstorms. The struggle for sunshine will cause below average high temperatures in the 80s. Overnight lows will be closer to normal in the low 70s. Over the weekend, some drier air is expected to filter into the region helping to break apart clouds and lower daily rain coverage. It is a little too early to tell if this dry air will take over by Saturday or wait until Sunday. Tigers and Jags fans will be watching closely! CLICK HERE for your detailed 7-Day Forecast. 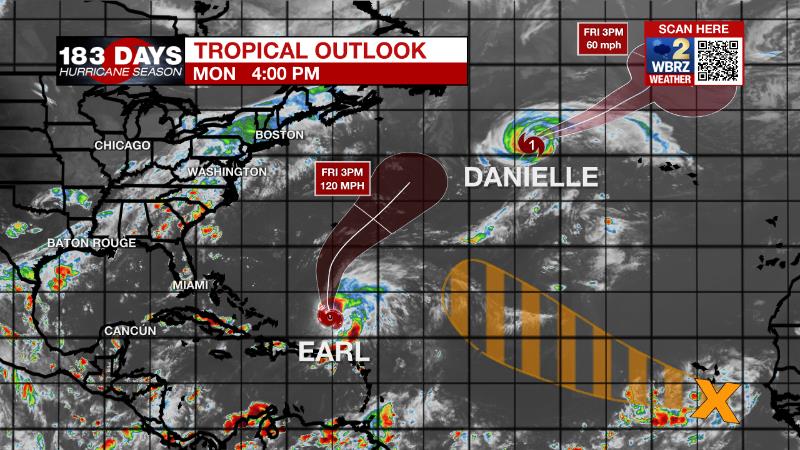 The Tropics: In the open North Atlantic, Hurricane Danielle is forecast to slowly weaken through the week. As of 4pm Monday, maximum sustained winds were at 85mph and the storm is expected to become a tropical storm by Thursday. Danielle was moving toward the northeast at 9mph and will accelerate in this same direction through the week.

700 miles south of Bermuda, Tropical Storm Earl will gain strength soon. As of 4pm Monday, maximum sustained winds were at 65mph with hurricane force winds anticipated by Wednesday. Earl was moving north at 6mph and will pick up speed to the northeast by the middle of the week. Heavy rain will cause isolated flash flooding across Puerto Rico and the Virgin Islands through tonight.

A tropical wave located southeast of the Cabo Verde Islands continues to produce a broad area of disorganized shower and thunderstorm activity. An area of low pressure is forecast to form with this system in the next day or so, and environmental conditions allow a fifty percent chance that a tropical depression could form by the latter part of this week as this system moves generally west-northwestward or northwestward over the eastern and central tropical Atlantic. 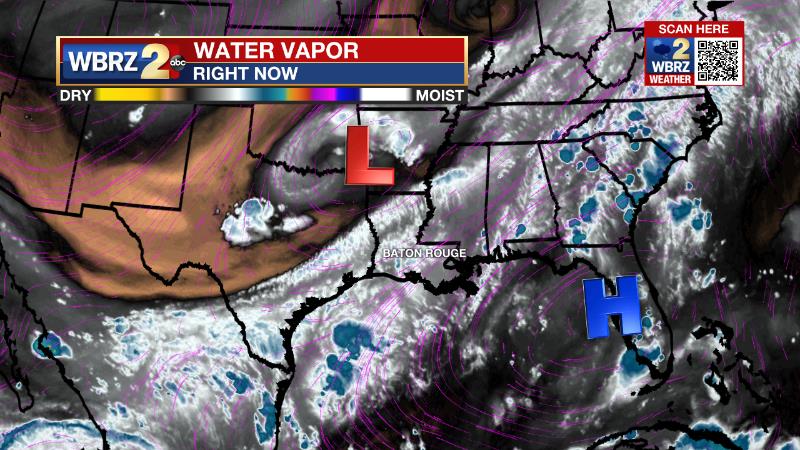 The Explanation: Tuesday and Wednesday, the local area will remain in southwesterly wind flow aloft on the east side of a shortwave trough of low pressure. Within this flow, occasional disturbances coupled with daytime warming will create enough lift for showers and embedded thunderstorms to develop. With above average moisture in the atmosphere, the threat for heavy rain cannot be ruled out but mainly cloudy to overcast skies may limit the warming needed to maximize this threat. By the middle and end of the week, the upper level pattern will change but the weather we experience may not be altered much. The shortwave trough will become a cut off upper level low. All other factors equal, mostly cloudy skies with times of light to moderate rain are anticipated through Friday. High temperatures will keep below average thanks to the gloomy conditions with readings generally maximizing in the mid 80s. On Saturday, a weak surface low and front will push to the southeast, possibly allowing some drier air to wrap in on the backside to lower rain coverage across Louisiana and Mississippi. Should the drier pattern emerge, a bit more sunshine will help afternoon temperatures closer to 90 degrees.