A pattern change is underway. After a cool and dry start to January, the back half of the month is looking milder with some times of fog and rain.

The Next 24 Hours: Mainly clear skies will carry through much of the night. Light southeast winds will cause dew point temperatures to rise into the low 40s. As air temperatures cool through the mid and low 40s, saturation may occur and allow some patches of fog to develop. After any lingering fog, Tuesday will be mostly sunny with highs in the low 70s.

After That: A weak cold front will slip through the area on Wednesday morning as low temperatures pause in the upper 40s. It is possible that the front stirs up a shower or two over the coastal parishes. This front is likely to weaken and stall on top of or just beyond the local area. For that reason, temperatures will continue to moderate warmer through the week as cloud cover increases due to added moisture and the stalled front in our region. Eventually, an upper level disturbance will cross over the stalled front setting up better chances for rain toward the end of the week—most likely north of I-10 on Friday. CLICK HERE to view your complete 7-Day Forecast. 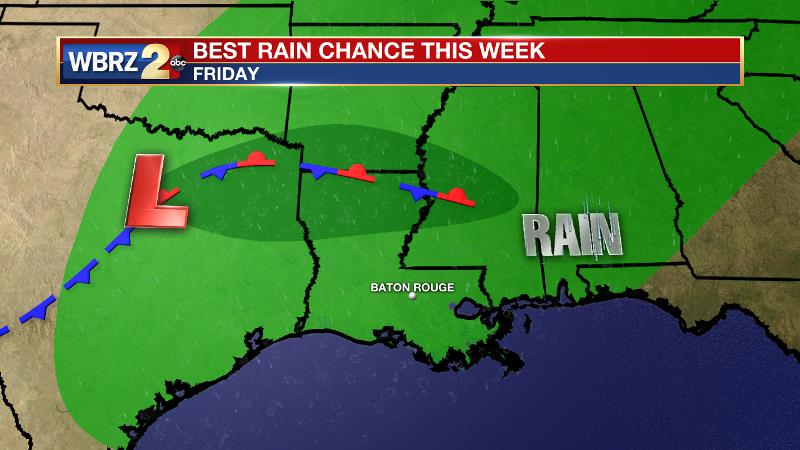 The Explanation: The upper level pattern will switch this week, featuring a slight ridge of warmer temperatures and more moisture. A weak surface front will move beneath this ridge into Wednesday morning, perhaps delivering a shower or two along the coast. This front will maintain near average low temperatures through Wednesday morning. The boundary will weaken and stall near the northern Gulf of Mexico. After that, persistent southerly winds will inject moisture into the atmosphere leading to some nighttime fog, warmer lows, more cloud cover and above average high temperatures. A lack of significant upper level disturbances or surface storms will preclude any decent rain chances until Friday. By that time, a surface low will be ejecting east from the Southwest U.S. as southwest flow aloft allows moisture content to settle well below average. These ingredients should combine for enhanced rain chances although forecast models are highlighting areas north of I-10 with greater coverage due to proximity to the fronts associated with the surface low. Pacific in origin, the air mass behind this system will not modify temperatures much. As of now, next weekend is looking primarily dry though lingering low level moisture will likely hold a lot of cloud cover in place.