BATON ROUGE - Police say they are still looking for two more suspects involved in a kidnapping that happened in broad daylight.

Authorities say James Williams is one of the suspects accused of kidnapping a man from his home on College Drive on Monday morning. A witness told police around 8 a.m., he saw two men wearing masks force another person into a blue SUV before speeding off. Another suspect was behind the vehicle in a white sedan.

Shortly after, an officer on patrol near Government Street and Glenmore Avenue saw a man jump out of an Audi SUV before it ran a red light. Authorities identified that person as the victim. The officer began pursuing the vehicle when two other men jumped out and fled before the car drove into a home. Police identified one of them as Williams. 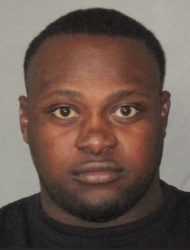 The victim told police the two men showed up to his apartment complex  that morning with guns in their hands, forcing him into his car.

While inside the vehicle, he told police Williams pistol-whipped him, causing a cut on his head and swollen eye. The victim says the incident stems from him testifying in court against someone the attackers know.

Williams was charged with armed robbery, aggravated kidnapping, aggravated battery, unauthorized use of a motor vehicle, and intimidating, impeding or injuring a witness.