The woman, who filed the protective order, alleged Dennis Perkins used his unmarked unit to conduct surveillance on her boyfriend.

The WBRZ Investigative Unit requested an interview with Livingston Sheriff Jason Ard and wanted to get more details about the order and what action was taken against the deputy.

Text messages between Steele and Chief Investigator Chris Nakamoto show she claimed they did not know:

NAKAMOTO (10:45am) -Good morning, Lori. We would like to put in another request to interview Sheriff Ard today.

NAKAMOTO (11:24am) -Did the sheriff's office (before Ard) investigate the protective order that was filed?

STEELE (12:10pm) -How can LPSO investigate something we have no knowledge of?

Jason Ard was not the sheriff in 2011 when the protective order was filed, however he was working for the department at that time. Steele claimed in her text messages that LPSO had no knowledge of it. 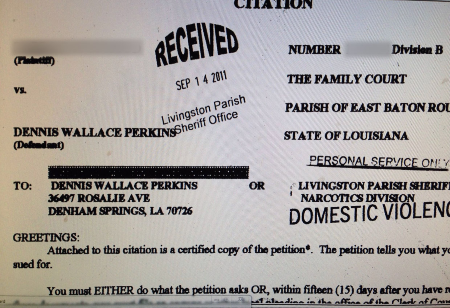 The WBRZ Investigative Unit also confirmed it was the Livingston Parish Sheriff's Office that served Perkins with the restraining order. So, how they did not have knowledge about it is a mystery.