A weak cold front will diminish over the region through Friday. This boundary will not bring major changes to the feel outside, but will continue to allow some beneficial rain to develop.

On Thursday, late day showers and thunderstorms brought 2-3 inches of rain to areas along and west of the Mississippi River. This resulted in approximately 30 percent of the forecast area receiving rainfall. The forecast was for 40 percent coverage. 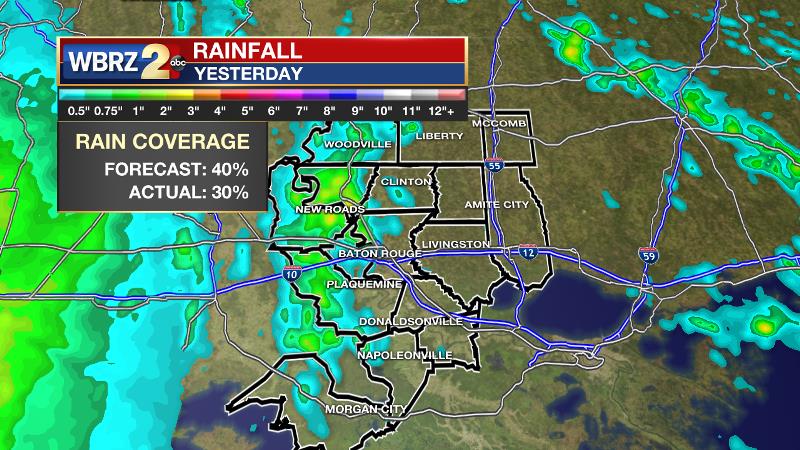 Today and Tonight: Isolated to scattered showers and thunderstorms are expected on Friday. As always with warm season storms, downpours and frequent lightning are possible too. With a mix of sun and clouds, high temperatures will stop in the upper 80s. Overnight will be partly cloudy with lows in the low 70s.

Up Next: Unfortunately, despite a weak front moving into the region, temperatures and humidity will stay above average. You may notice morning and evenings as slightly more comfortable but that is about it. A few showers and thunderstorms could develop on Saturday but rain chances decrease to about nil Sunday through Tuesday. High temperatures will continue to reach the low 90s as Baton Rouge is on pace for its hottest September on record.  Both LSU and Southern will be on the road this weekend and weather is not expected to be a major factor in either game. Temperatures will be slightly warmer for Southern in Tallahassee than LSU in Nashville. 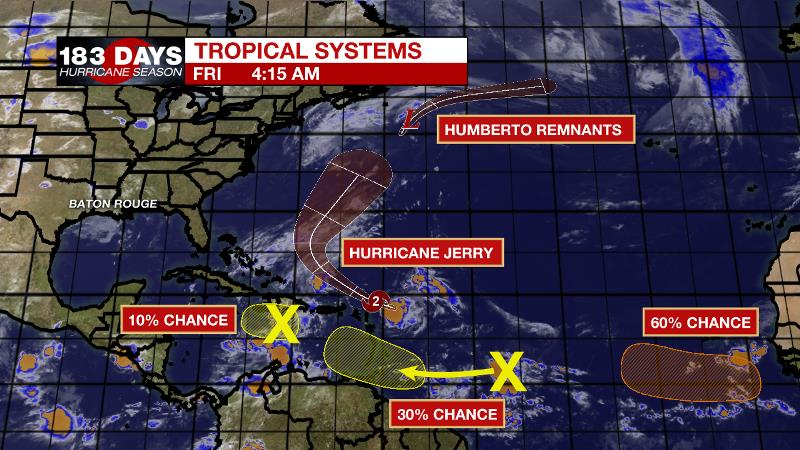 The Tropics: The Atlantic Basin is rather busy. Hurricane Jerry is packing 105moh winds on a northwestward motion toward the Leeward Islands. The storm will remain just north of the islands but rain and wind are expected through Saturday morning. A turn to the north will occur early next week, well east of the Bahamas. Bermuda will have to pay attention to the path of this storm for the middle of next week. Hurricane Humberto has transitioned to an extratropical low in the north Atlantic. Three other waves are being monitored. One near Hispaniola has a minimal chance of development as it drifts west across a heavily sheared Caribbean Sea. That is the same reason a second wave moving toward the Windward Islands will struggle to develop. The next wave moving off the African Coast will have a medium chance of development early next week.

Atmospheric moisture will increase on Friday, and with a front in the area, this should help scattered showers and thunderstorms develop during the afternoon. Drier air will filter into the area for the weekend, especially across areas north and east of Baton Rouge. Although daytime temperatures will still be warm and above average, slightly lower humidity levels will make mornings and evenings a bit more comfortable. A mostly dry forecast is being carried Sunday to Tuesday as an upper level ridge dominates the southeastern U.S. The GFS model shows a breakdown of this ridge and possibly a front moving into the region by the end of next week. The ECMWF strengthens the ridge and brings hotter temperatures. Giving the 8-10 day timeframe on this, neither scenario is worth buying into at this time.