Very hot temperatures will stick around through the weekend. While humidity is not quite to normal July or August levels, there will be just enough moisture in the air to make afternoon heat indices top out in the 105-110 degrees range.

Today and Tonight: Ample sunshine will drive mild morning temperatures will into the 90s by midday. Expect a high temperature around 97 degrees during the afternoon hours beneath mostly sunny skies.

*HEAT ADVISORY* for the shaded area. Keep an eye on kids, pets, the elderly and check the backseat! #WBRZwx pic.twitter.com/733eW2uBRM

A HEAT ADVISORY has been issued once again for the possibility of feels-like temperatures reaching 108 degrees during the afternoon. Whether or not that mark is met, take it easy outside and stay hydrated. Winds will be light and westerly. Overnight will be clear with lows in the mid 70s.

Up Next: A ridge of high pressure will center over the forecast area this weekend, continuing the hot and dry pattern. Highs will be in the upper 90s, possibly even reaching 100, and feels-like temperatures will be in that dangerous 108 range. Both LSU and Southern football can expect very hot temperatures and dry conditions for their respective games. Despite an evening kickoff, LSU will likely kickoff with thermometers above 100 degrees in Austin. Southern will start with temperatures around 90 degrees in Memphis but they will climb into the mid 90s by the end of the game. By Monday, some low end rain chances come on to the board, but many spots very well could stay dry through most of next week. 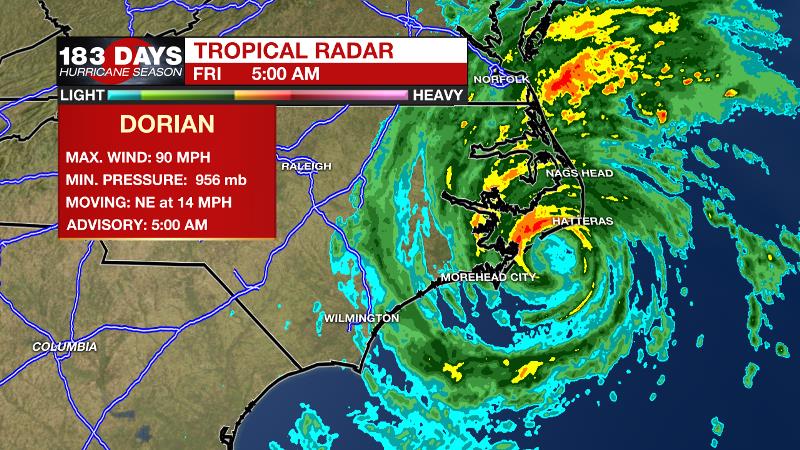 The Tropics: As of 5am Friday, Hurricane Dorian was positioned just east of Wilmington, NC. Maximum sustained winds were at 90mph with a minimum central pressure of 956mb. The storm will accelerate northeastward today after a landfall across the Outer Banks. Hurricane force winds, 5-7 inches of additional rain and 4-7 feet of storm surge is expected. Dorian will race out to sea and meet its demise after that. Gabrielle has become post tropical in the east, central Atlantic. The fish storm will continue northward. 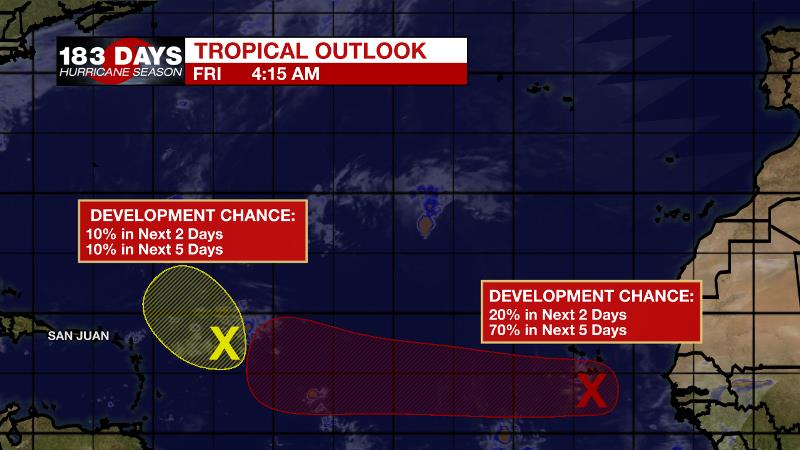 A weak wave near the Lesser Antilles has a less than 10 percent chance of development over the weekend. The latest wave to emerge off the African Coast bears a bit more attention as it has a high chance of tropical development as it moves westward across the central Atlantic next week. For the latest on the tropics, check in with wbrz.com/weather, WBRZ Weather on Facebook and Twitter.

An upper level ridge will continue to build across the region, centering over the area Saturday and moving east on Sunday. This ridge will continue the well above average temperatures through the weekend and perhaps into early next week. The HEAT ADVISORY issued by the National Weather Service barely verified, that is, only a few spots reached a heat index of 108 degrees. It has been re-issued for Friday since the dew point temperatures are just a touch higher. Criteria aside, it was and will be hot so remember to stay hydrated and not over exert during the peak heating hours outside. A weak cold front will drop into the region from the northeast on Sunday and this could help to trigger a stray shower, but not much as the atmosphere will remain rather parched. By next week, the upper level ridge will center east of the region and heat will continue. However, the dew point temperatures will climb so the humidity will be higher while air temperatures trend lower and a bit closer to average. Stirring up rain will still be difficult but an onshore flow gives hope to a few afternoon showers and thunderstorms developing due to added moisture. We will carry rain coverage of about 20 percent Monday through Thursday—so not much.