A wet weather pattern will kick into gear over the weekend. Any thunderstorms Saturday into early next week could produce downpours, frequent lightning and gusty wind.

Next 24 Hours: Overnight will remain mostly clear but it will feel noticeably more muggy than the previous few nights as low temperatures stay in the low to mid 70s. Saturday will begin with some sunshine, driving high temperatures into the low 90s. By mid-afternoon, showers and thunderstorms will develop with isolated to scattered action then carrying beyond sunset. Actually how much of the area gets rain tomorrow is a bit questionable. As of now, the forecast calls for 50 percent of the 13 Parish, 3 County Area to receive rain during the afternoon and evening hours, but check back in as that could trend drier.

Up Next: A weak cold front will move into the area and stall by the second half of the weekend. Sunday and Monday look to be busy with widespread showers and thunderstorms occurring in multiple rounds. While neither day should be a full washout, stringing together multiple hours of dry time could be difficult. The broad rainfall forecast calls for 2-4 inches through next week, but a few small areas could receive much higher amounts in any persistent thunderstorms. As we know is typical during the warm season, this could create some localized street and poor drainage flooding. The remnants of the front will continue to instigate afternoon showers and thunderstorms on Tuesday and Wednesday. While the rain may dampen some outdoor events, it will generally be beneficial to the Capital Area which is considered “severely dry” in the U.S. Drought Monitor. CLICK HERE for your detailed 7-Day Forecast. 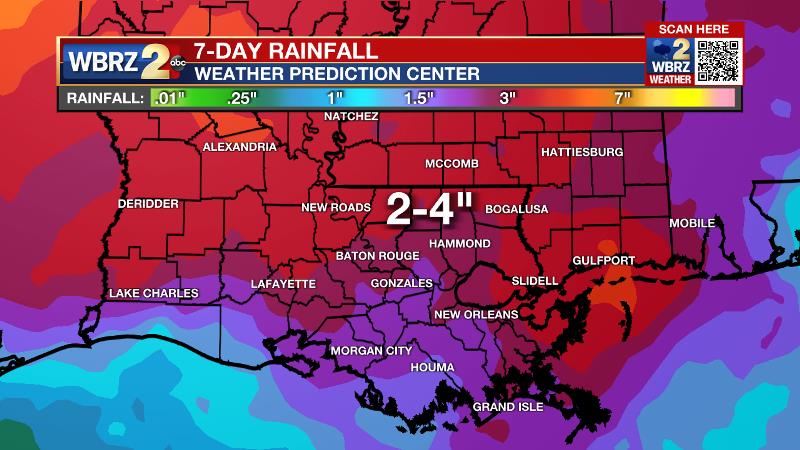 The Explanation: By Saturday afternoon, cooling temperatures aloft will promote instability while southwesterly upper level winds transport moisture back into the region. With the daytime warming, scattered showers and thunderstorms will develop across southeast Louisiana and southwest Mississippi. With a weak front entering the region, a trigger may remain in place for some activity to continue overnight Saturday into Sunday. A deep feed of moisture originating from the Caribbean Sea will surge across the region pushing atmospheric moisture content to very high levels. With that front moving closer to the region and slowing down on Sunday, there will be a clear forcing mechanism in addition to the favorable conditions provided by the cooler, more unstable atmosphere and added moisture. Numerous to widespread showers and thunderstorms will carry through the second half of the weekend and into Monday. Though the timing is not ideal for outdoor plans, this rain will be beneficial to most areas considered to be in drought and it will help to keep high temperatures in the 80s. Even Tuesday and Wednesday, the pattern will stay favorable for episodes of heavy rain with a continued feed of moisture across the region and a weakening, but stalled boundary providing a focus for development. Southwest winds in the upper levels favor disturbances rolling over the area, which will trigger rounds of activity. Since these little impulses tend to be very subtle, they may be difficult for us to detect and time out until next week. Daytime warming and marine breezes will certainly play a role in development as well, making the middle of the day the most likely time for activity.