Cloud cover should sock the area in for the next several days. Rain chances will be low and mainly confined to areas south of I-10 over the weekend, but will ramp up due to Tropical Storm Beta next week.

NEW AT 10PM: *Tropical Storm Watch* has been posted for St. Mary Parish westward to the Texas border--this is mainly for the possibility of winds and some 1-3' of surge along the coast. Into next week, a heavy rain potential will be something to watch. #Beta pic.twitter.com/D3GVus8Ihe

The Tropics: Tropical Storm Beta has formed in the southwestern Gulf of Mexico. As of 10pm Friday, Beta had maximum sustained winds of 60mph and was drifting northeast at 12mph. The storm is expected to turn west over the weekend and gradually strengthen as it approaches the coast of Texas. The track is highly uncertain beyond that and areas from the Mexico border all the way to Louisiana should monitor the forecast. Even without a direct strike, the system will be capable of dumping some heavy rain across south Louisiana. 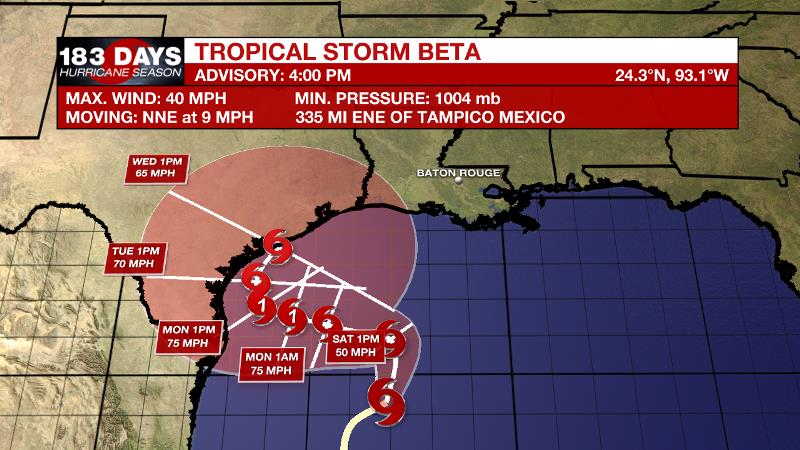 In the central Atlantic, with maximum winds of 125mph, Major Hurricane Teddy has prompted tropical storm watches for Bermuda. Large swells have spread across much of the western Atlantic increasing rip current threat for the U.S. Coast. Beyond Bermuda, New England and southeastern Canada will need to watch this storm.

Tropical Storm Wilfred formed in the east, central Atlantic on Friday morning. However, this will be a short-lived system with low prospects for substantial strengthening before it falls apart by early next week.

Tropical Storm Alpha developed later Friday morning and made landfall in Portugal later in the day. Alpha will fully dissipate on Saturday.

Post-tropical cyclone Paulette could re-acquire some tropical characteristics as it stalls over marginally warm water in the northeast Atlantic. The next tropical wave to exit the African coast is given a 20 percent chance of formation.

The Next 24 Hours: The weekend will bring fall-like weather. Overnight will be mostly cloudy with lows in the upper 60s. On Saturday, some sun could sneak out in northern neighborhoods but mostly cloudy skies will dominate the day. A shower or two is possible, especially south of I-10. Highs will stop in the low 80s.

After That: Though still isolated, the chance for showers will be a little higher on Sunday. Tropical Storm Beta will exert more of an influence on the local weather next week, regardless of the track, which remains very uncertain at this time. Monday through Thursday, moisture from Beta in the western Gulf of Mexico will interact with a stalled front in the northwestern Gulf to maintain widespread cloud cover and periods of rain. Due to the tropical connection, some of the rain could be heavy. 2 to 6 inches area expected with the lowest amounts north of I-10 and the highest amounts south. Friday might be the next decent chance for some sunshine.

The Explanation: Tropical Storm Beta in the southwestern Gulf of Mexico, a stalled front in the northern Gulf of Mexico and a ridge of high pressure over the Great Lakes region will be the primary drivers of our weather through next week. Moisture riding over the stalled front is leading to a layer of high but thick clouds over the region. As Beta and the front are log jammed, clouds will persist in skies for days to come. Light rain could fall at times over the weekend, especially closer to the coast. The clouds will also keep high temperatures well below average in the low 80s. On the other hand, the clouds will keep lows in the upper 60s despite lower dew point temperatures that would otherwise allow low to mid 60s. As Beta gets closer to Texas and gradually drifts north along the coast, local rain coverage and intensity will increase. At this time, the Weather Prediction Center expected 7-Day rain totals of 2 to 6 inches across our forecast area, with highest amounts in southern spots. If spread out over time, then there should not be too many flood issues, but if a period of high rain rates can occur, then localized flooding is possible.