Today and Tonight: More rain in the forecast, but much less is expected through the day. A wave off the approaching cold front will press into our area from the north, and impact with a sea breeze front from the south along the I-10 corridor. The timing should be around 3 PM, with isolated showers and storms developing until 7 PM. Rain should dissipate afterwards, but some lingering pockets of moisture could stick around through the early evening hours. Temperatures will be rather warm, since the showers will hold off until later in the afternoon. High will peak near 92°, with heat index values of 106°. Lows will drop slowly to 75°. 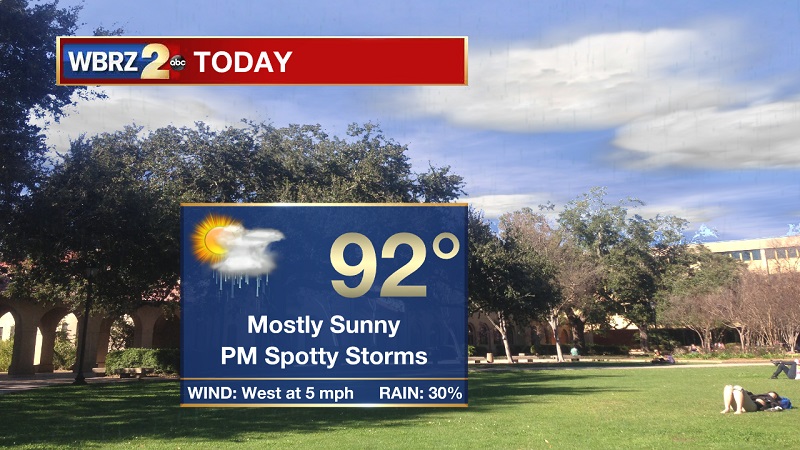 Up Next:  Isolated afternoon showers today, ramping up to more scattered on Wednesday. Dry conditions for the latter half of the week, as dewpoints drop to the mid-to-upper 60s. This pleasant weather will not last long, as afternoon storms return on Sunday. 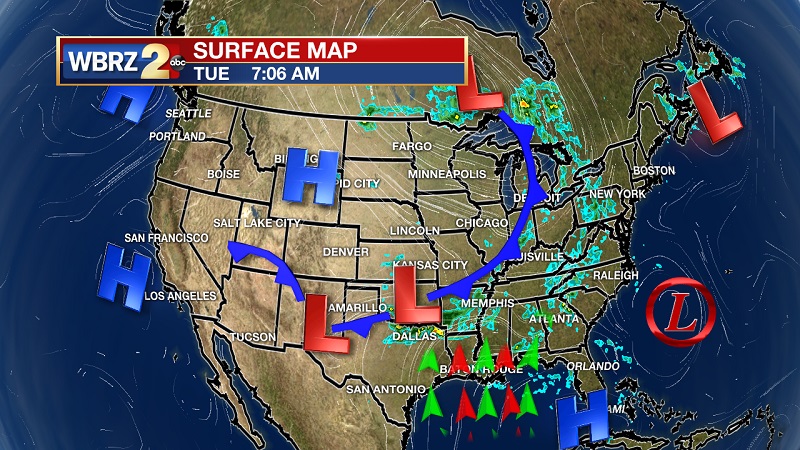 The Tropics: Tropical Storm Dorian moves across St. Lucia into the eastern Cribbean Sea with tropical storm force winds. Currently located about 15 miles west-northwest of St. Lucia with maximum sustained winds of 50 mph, and moving west-northwest at 13 mph. A Hurricane Watch is in effect for Puerto Rico and areas of the Dominican Republic. A Tropical Storm Warning is in effect for Martinique, St. Lucia, St. Vincent, and Puerto Rico. A Tropical Storm Watch is in effect for Dominica, Grenada, Saba, St. Eustatius, and areas of the Dominican Republic. Dorian is moving toward the west-northwest near 13 mph and this motion is expected to continue through tonight, followed by a turn toward the northwest on Wednesday. On the forecast track, the center of Dorian is expected to move across the Windward Islands and into the eastern Caribbean Sea during the next several hours. Dorian is forecast to pass near or south of Puerto Rico on Wednesday, move near or over eastern Hispaniola Wednesday night, and move north of Hispaniola on Thursday. Maximum sustained winds remain near 50 mph with higher gusts. Slow strengthening is forecast during the next 48 hours, and Dorian is forecast to be near hurricane strength when it moves close to Puerto Rico and eastern Hispaniola. 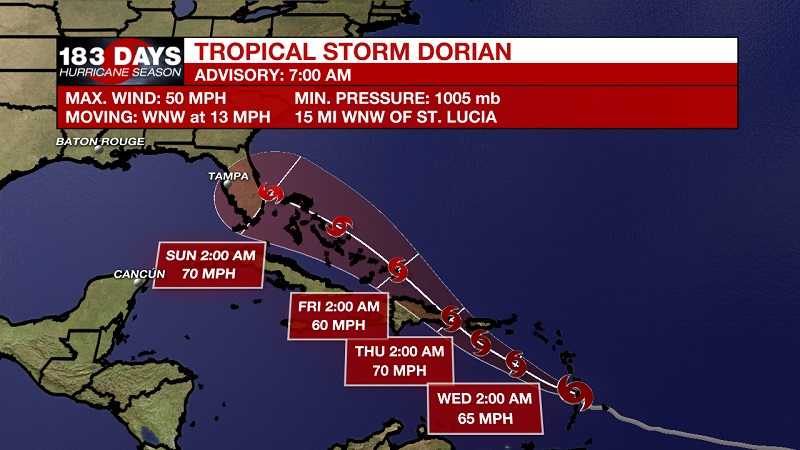 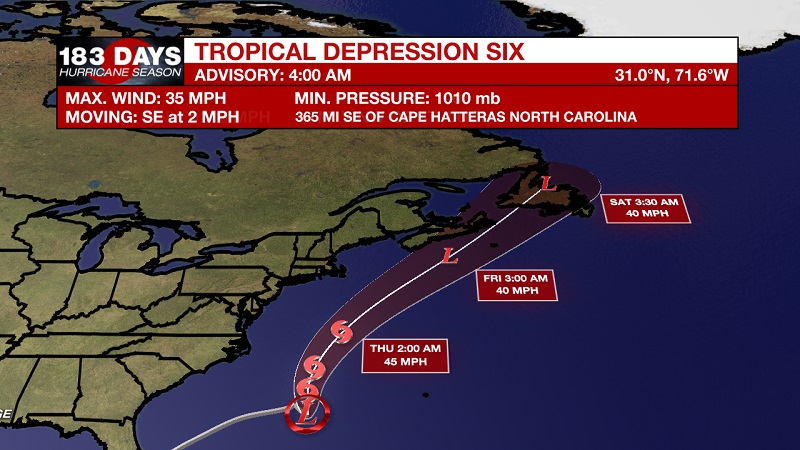 Tropical Depression Six is poorly organized and drifting southeastward between the southeast U.S. coast and Bermuda. It is currently located about 365 miles southeast of Cape Hatteras, North Carolina, with 35 mph sustained winds, and moving southeast at 2 mph. It is expected to move little through tonight, then accelerate northward Wednesday to northeastward Thursday through Saturday. Maximum sustained winds remain near 35 mph with higher gusts. Some strengthening is expected and the cyclone is forecast to become a tropical storm later tonight.

An approaching cold front will push into northern Louisiana later this morning, but will stall along the I-20 corridor. A wave will move off of the main front will encounter a sea breeze front along the I-10 corridor around 3 PM. This will develop isolated showers and storms, as both of these waves will be breaking up as they converge. The main cold front will pass through Wednesday afternoon, bringing scattered showers and storms through our area. Some cells could be strong, but forcings should stay just shy of severe criteria. Heavy downpours will also occur, so localized flooding is possible as rainfall rates could be around 1-2 inches an hour. The cold front does break through and into the Gulf, bringing a dry and stable air mass across our area. Sunny skies, dewpoints in the 60s, and below average high temperatures will be the forecast beginning Thursday and linger into Saturday. This pleasant weather does not last too long as moisture returns in the form of afternoon showers and storms on Sunday, with rain chances increasing into Monday.