Ascension Parish, still cleaning up after Ida, prepares for Nicholas

BATON ROUGE - The effects of Hurricane Ida linger in Louisiana, where 92,577 remain without power, and now the Gulf Coast state braces for impact from yet another storm system.

Nicholas was a Hurricane when it made landfall in Texas. But as of 4 a.m. Tuesday, the system has been downgraded to a Tropical Storm.

The storm triggered a Flash Flood Watch that remains in effect until Thursday morning for the entire WBRZ forecast area.

WEATHER ALERT! Flash Flood Watches are out for the entire area and people need to plan their day around typical flooding problem spots.

Expected to deliver at least 4 to 7 inches of rain to the region, Nicholas may cause rainfall heavy enough to result in significant draining issues.

All too familiar with the dangers of flooding, some capital area residents are making plans to get to higher ground and others are stocking up on items like the ones listed in the graphic below. 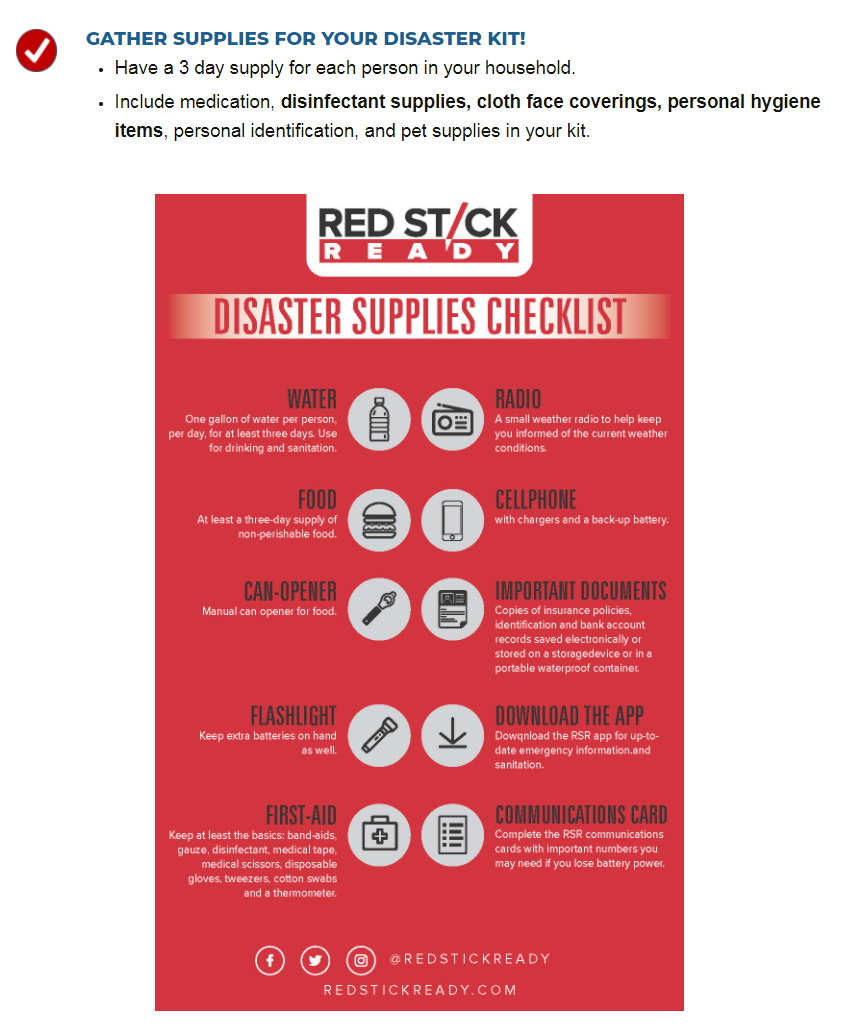 A more detailed list of items needed during bad weather, and other suggested pre-storm precautionary measures to keep in mind can be found here.

On Tuesday morning, just over 7,000 Demco customers are in the dark as they prepare for the approaching storm.

The company took to its Facebook page Monday, to explain the process of power restoration and why it can sometimes be a lengthy process.

Entergy assured customers that it is keeping an eye on the storm, issuing the following statement on Monday: "Even as we continue to restore customers impacted by Hurricane Ida, we're monitoring and planning for the potential effects of Tropical Storm Nicholas."

The Governor touched on how Nicholas is expected to impact the state, saying, "The most severe threat to Louisiana is in the Southwest portion of the state, where recovery from Hurricane Laura and the May flooding is ongoing. In this area heavy rain and flash flooding are possible. However, it is also likely that all of South Louisiana will see heavy rain this week, including areas recently affected by Hurricane Ida."

He urged locals to stay current on weather conditions in their area, saying, "This tropical storm has the potential to disrupt some power restoration and recovery work currently underway. I encourage anyone who has had recent damage from Ida, Laura or other disasters to take necessary measures to protect their home or business from additional harm. All Louisianans should to pay close attention to this tropical system in the coming days.”

WBRZ Channel 2 News is keeping a close eye on the storm; for the latest on weather developments, follow WBRZ's Weather Team by watching Channel 2 News or following them on social media.