Warming will continue through Sunday as temperatures could pop into the upper 80s before the weekend is over. The next appreciable chance for rain will follow on Monday.

Next 24 Hours: Another clear and cool night is expected. Since the air remains rather dry and winds will stay light, low temperatures will drop into the mid 40s rather quickly. The dry air and light winds will work in tandem with another full day of sunshine for high temperatures to rebound into the upper 70s on Thursday.

Up Next: Skies are expected to stay mostly clear through Friday and continued lower humidity will cause a large range from low to high temperatures. Numbers will tick up a bit more to end the week with lows in the upper 40s and highs in the upper 70s. Over the weekend, added moisture (higher dew points) will result in lows in the 50s and 60s with highs in the 80s. An isolated shower or two could develop north and west of Baton Rouge on Sunday but the better chance for area wide showers and thunderstorms will come with a slow moving cold front Monday into Tuesday. It is not yet clear if this front will fully clear the area for a period of cooler and drier weather or stall to keep some showers around for a few days. CLICK HERE for your detailed 7-Day Forecast.

The Explanation: On Thursday, an upper level ridge will begin to build in from the west as a surface high pressure system remains over the region. As a result, not much will change in sensible weather. By Friday, each feature will move farther east and the upper level ridge will bridge the area while the surface high moving into the Southeast U.S. results in a gradual onshore flow to the area. Temperatures will continue to nudge warmer but light winds will result in a slower increase in dew point temperatures the changes may not be felt until Saturday. The slow to return moisture will result in very dry conditions and low relative humidity values through the end of the week. Over the weekend, the upper level ridge will migrate slightly eastward setting up a deep southwesterly wind flow in the atmosphere. This will allow moisture to increase throughout the column when combined with onshore flow returning at the surface. Temperatures will climb 10-15 degrees above average. Despite the increased moisture, rain will be hard to come by in the absence of any significant triggering mechanism and so some shallow showers are all the will be possible mainly north and west of Baton Rouge. On Monday, a frontal system will begin to settle southward into the region. An upper level trough, still expected to pass well north of the region, is expected to be strong enough to push a cold front into and through the area. This feature will cause scattered showers and thunderstorms Monday and into Tuesday. 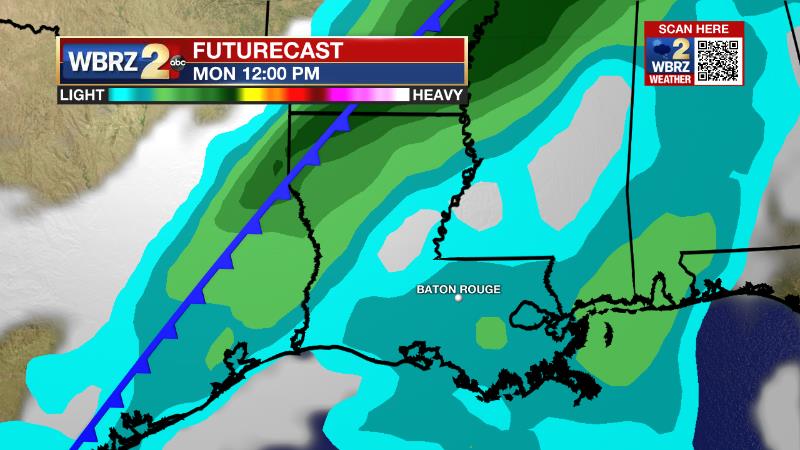 Some forecast models have the front stalling over Louisiana, which would lead to an extended stretch of rain chances. Others push the front through bringing cooler and drier conditions for the middle of next week. Right now, we are leaning toward the latter scenario, but leaving a small mention of rain in the forecast.