While a cold front is expected to push through the region by midday Wednesday, do not expect significant changes in temperatures. Struggling Tropical Storm Eta still looks like a non-threat to the local area.

The Next 24 Hours: With a weak cold front traversing the region, mostly cloudy skies and spotty showers will remain possible into Wednesday morning. Lows will not drop much tonight since the front is not going to be through, so expect temperatures in the mid to upper 60s.  As that front chugs to the southeast on Wednesday, the chance for showers will decrease from northwest to southeast into the afternoon hours. With some returning sunshine, expect highs in the low 80s.

After That: While the atmosphere may dry a bit thanks to the passing front, do not expect much change in temperatures. Thursday and Friday will be partly to mostly sunny with highs in the low 80s and lows in the upper 50s. Another weak cold front is pegged to slide by on Saturday and it may create a few showers, but chances look low at this time. Whatever remains of Tropical Storm Eta is currently forecast to remain well east of Louisiana. A slightly stronger push of cool air could come into the region early next week and allow temperatures closer to averages, which are 73 and 50 for this time of year. CLICK HERE to view your complete 7-Day Forecast. 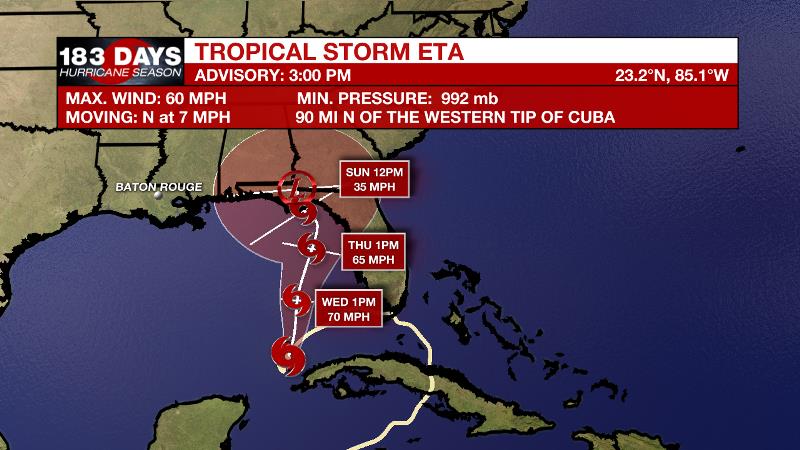 The Tropics: Tropical Storm Eta remains in a difficult environment for organization minus warmer waters. Now turning north with maximum sustained winds of 50mph, the storm could potentially regain hurricane status over the eastern Gulf of Mexico over the next two days before it runs into cooler water, increased wind shear and dry air. The system will be weakening as it approaches the northern or western coast of Florida by this weekend. The system does not currently pose a threat to Louisiana.

Tropical Storm Theta developed in the far eastern Atlantic on Monday night becoming a record-breaking 29th storm of the season. Fortunately, this system is moving east and away from the United States and will diminish over the next few days.

Another tropical wave is forecast to move over the central Caribbean Sea. There is a 70 percent chance that a tropical depression could form over the next 5 days.

The Explanation: A surface high pressure centered to our northeast will gradually erode due to Eta and an approaching cold front. Since the latest front is weak and will be diminishing, moisture trapped in the low levels of the atmosphere will likely lead to low clouds and some fog into Wednesday morning. Tropical Storm Eta is expected to continue to drift north into the northeastern Gulf towards the Florida panhandle Friday into Saturday as a weakening tropical storm. Confidence is increasing in this more eastern track, and that means local impacts should be nil. A stronger cold front will arrive by early next week but it is not expected to produce much rainfall.