BATON ROUGE- LSU Police are asking for the public’s help in identifying a man accused of access device fraud.

Police describe the suspect as a white male with multiple tattoos on his left arm, one on his wrist that appears to be a large "M" similar to the Monster drink logo.

He is seen on video surveillance traveling in what authorities believe to be an older model silver Subaru Outback.

Those with information relative to the case are urged to contact LSU Police at 225-578-3231. 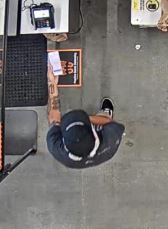