Unsettled week of weather ahead

An active weather pattern is expected over the next several days. There is a high risk for flash flooding for parts of north Mississippi and Alabama on Monday. Fog may be an issue for the local area on Tuesday. Finally, the threat for severe weather will need to be monitored as a cold front kicks through the area on Wednesday night.

Today and Tonight: While clouds will be persistent for much of your Monday, showers and thunderstorms will be more sporadic. Scattered activity is anticipated, mainly during the afternoon hours and mainly north of I-10. It will be muggy and mild with high temperatures in the mid 70s. 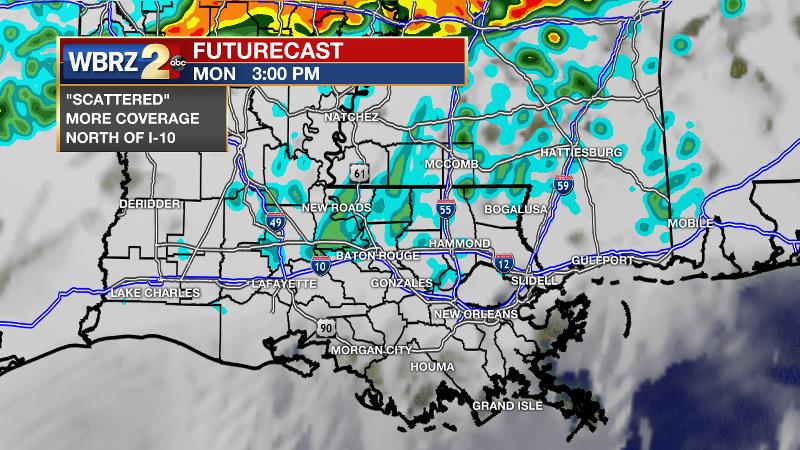 Overnight will stay cloudy with low temperatures in the upper 60s. Fog will develop along the coast and blow inland, though it is questionable how far north it will extend. Any spotty showers would inhibit that inland movement. Just be aware, especially south of I-10, some dense fog is possible.

Up Next: Fog will linger in some places to begin Tuesday, but the afternoon conditions will end up similar to Monday. It will be warm and muggy with scattered showers and thunderstorms—perhaps just a little less coverage than on Monday. A cold front will move into the region on Wednesday, set to remove the unsettled weather. Prior to this, showers and thunderstorms are expected late Wednesday into early Thursday. The Storm Prediction Center has gone with an aggressive outlook for this time period, placing locations north and west of Baton Rouge in a 3 out of 5, “enhanced risk” for severe weather with a “slight risk” for the remainder of the forecast area. Showers will end from west to east on Thursday morning with cooler and drier conditions moving in to end the week.

An upper level trough over the Southwestern U.S. will dictate the local weather through the middle of the week. A stalling cold front located over the I-20 corridor will be a focus for the development of showers and thunderstorms on Monday—especially north of the forecast area. A disturbance in the upper level winds will ride over the boundary this afternoon. Both mechanisms will work in tandem to create an area of heavy rain from north Louisiana eastward through Mississippi into Alabama. Locally, scattered is the key word and the day will not be washout. The stalled front over central Louisiana and Mississippi will allow southerly wind flow to keep dew point temperatures in the mid to upper 60s. If winds back off into the 5mph range overnight, coastal fog will nudge northward and inland. How far the fog is able to advance will depend on the winds and any overnight showers, which would dampen development. The upper level trough will start to advance northeastward into the Midwest on Tuesday allowing another round of scattered showers and thunderstorms followed by another night of fog. Business will start to pick up on Wednesday. The upper trough will race from the Midwest to Great Lakes Region through the day. A strong southwesterly jet stream aloft is expected on the eastern side of this trough. A surface low is expected to develop along the Texas Coast in response to the advancing trough, driving a warm front northward across the central Gulf Coast. During the late morning and afternoon hours Wednesday, showers and thunderstorms will develop over western Louisiana. Ongoing high dew points and warming temperatures into the afternoon will encourage continued development eastward as the upper level winds increase over central Louisiana and southwest Mississippi. A line of thunderstorms is expected to develop by the evening hours and charge east across the Baton Rouge area becoming the main threat for severe weather. Along this line, damaging wind gusts and isolated tornadoes will be the primary threats but as is usually the case, any cells that develop ahead of the line could also produce a tornado. 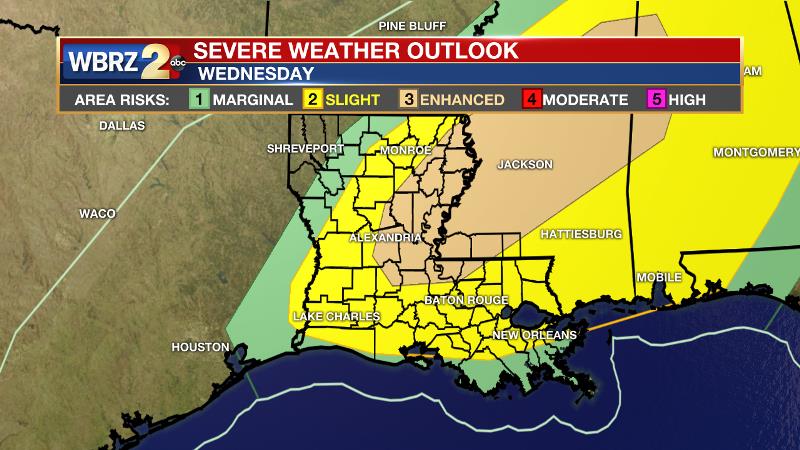 The Storm Prediction Center has already highlighted an area north and west of Baton Rouge with an "enhanced risk"  for severe weather. There are a few factors limiting the overall threat, including instability and directional wind shear. We will monitor these trends and yield to the SPC forecast for now. Much cooler and drier air is expected after the cold front moves through on Thursday morning. Quiet conditions will persist through Saturday.