Texts show manager firing student who asked off for funeral

EWING, N.J. (AP) - A text exchange shows a New Jersey restaurant manager firing an employee after she asked for time off to attend a friend's funeral.

The student's texts with her manager at Cafe 72 in Ewing shows her explaining that she wanted to take off for the funeral of 20-year-old Michael Sot, a student at The College of New Jersey.

Sot died this month after the car in which he was the designated driver was hit by an allegedly drunken driver. 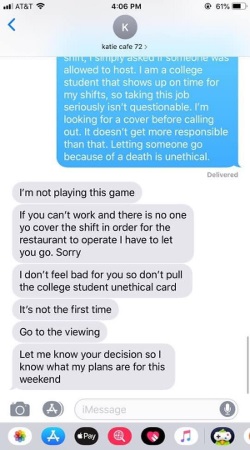 The manager, identified as "Katie," responds by telling the unidentified employee "I have to let you go" amid a testy exchange.

After the exchange made headlines and drew criticism, Cafe 72 posted a lengthy apology to its now-deleted Facebook page and says it donated $1,000 to a Sot fundraiser.