Temperatures and clouds increasing through the week

The warming trend will continue but with that will come increasing clouds. While some spotty showers become possible as early as Wednesday, organized rain is not expected until at least Sunday.

Next 24 Hours: The warming trend is not limited to afternoons. Tuesday morning was 10 degrees warmer than Monday morning and Wednesday morning will follow suit with low temperatures in the upper 50s. Southeasterly winds will continue to inject enough moisture into the atmosphere that more clouds will develop on Wednesday and a highly isolated, light shower is possible. High temperatures will reach the upper 70s.

Up Next: Thursday and Friday, mornings will be near 60 degrees with afternoons crossing that 80 degree mark. Unfortunately, clouds may become the main feature up top. A stray shower remains possible Thursday afternoon into the weekend. However, no washouts are foreseen at this time. We may have to keep an eye on Sunday night for the next chance of impactful weather in the form of rain and thunderstorms. While the Storm Prediction Center shows an outlook for severe weather due to that storm system, the local area is currently not included. CLICK HERE for your full 7-Day Forecast.

The Explanation: With little change to winds on Wednesday and Thursday, expect a continuation of the warming trend with lows in the 50s and highs nearing the 80s. The onshore flow, a la advance of low level moisture may be just enough to spark an isolated, light shower with the instability caused by daytime warming. However, an upper level ridge over the Gulf of Mexico will keep any organized precipitation well away from the area through Saturday. By the end of next weekend, a deep shortwave trough will be cutting across the southern third of the country. As this trough approach the Mid-Mississippi River Valley, it is expected to take on a negative tilt, which is a more favorable orientation for stronger thunderstorms. 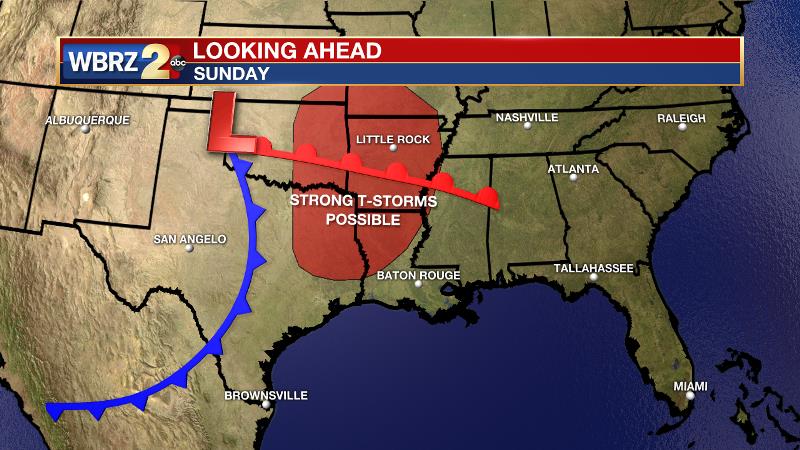 While it is too early to dig into the parameters and talk about specifics, the Storm Prediction Center has already outlined areas of northwestern Louisiana, Arkansas, Oklahoma and Texas with an outlook for severe weather. Should the system track a little farther south, it could be something to watch in the Baton Rouge area as well.