Warmth is the weather story through the remainder of the week. Expect several record highs to fall Wednesday through Friday.

Today and Tonight: Beneath partly sunny skies, Tuesday afternoon highs will jump into the mid 80s. A rogue shower is possible during the evening or overnight hours. With some clouds, morning lows will settle in the upper 60s.

Up Next:  The rest of the week should feature mostly sunny afternoons with high temperatures in the mid to upper 80s. One or two locations could clip 90 degrees Wednesday through Friday as record high temperatures are slated to fall at Metro Airport. Lows will be in the upper 60s and low 70s. The next frontal system that could deliver some rain and break the early spring warmth is expected next weekend.

An upper level trough of low pressure will race out of the Plains States and move north of the local area on Tuesday night. This will send a weak surface front toward the I-10/12 corridor, but the front will weaken and diminish before making it there. It is possible that a stray shower is able to develop during the evening hours. The boundary will completely dissipate by Wednesday morning although it may have enough of a push to drop dew point temperatures by a few degrees. This outcome would have a subsequent impact on temperatures—allowing a greater range from morning lows to afternoon highs. A ridge of high pressure will establish over the Gulf of Mexico Wednesday through Friday. Subsidence warming will lead to well above average early spring temperatures with highs maxing out around 90 degrees. Thanks to the lower dew points, lows will likely make it back into the mid to upper 60s. 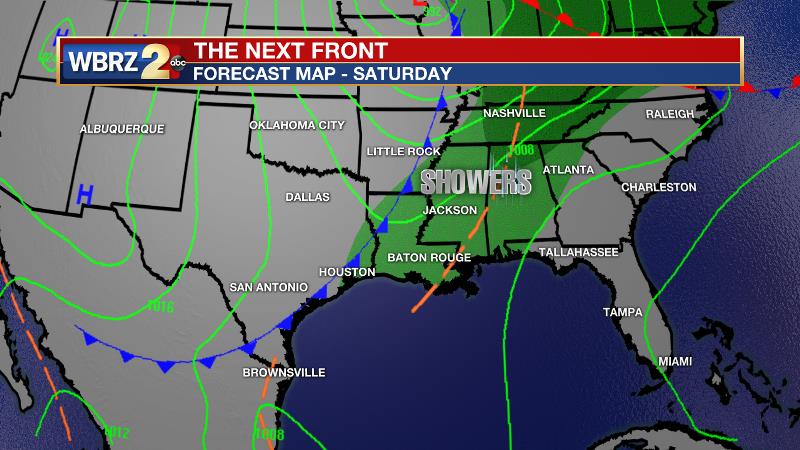 Another trough approaching from the west will tamp down the ridge as we head into the weekend. Slowly but surely, a front is expected to chug through with some showers and gradually cooling temperatures. Behind the front, continental surface high pressure will maintain northerly winds next week to restore near average temperatures.