Some under a WINTER WEATHER ADVISORY Tuesday morning

A strong cold front will bring temperatures that are 10-15 degrees below average Tuesday and Wednesday, as well as the season’s first hard freeze. Wilkinson, Amite and Pike Counties in southwest Mississippi are under a *WINTER WEATHER ADVISORY* until 9am Tuesday for the possibility of wintry precipitation creating a few slick spots on roads.

Today and Tonight: Your new week will begin on a quiet note. After some early sunshine, clouds will increase later in the day, as an approaching cold front moves in from the northwest. Highs will stretch for the upper 60s again. Rain is expected to develop around midnight, and once it begins, thermometers will quickly drop through the 40s.

Up Next: On Tuesday morning, rain is expected to wrap up quickly, as cold air surges into the area. If this overlap of precipitation and cold air is tight enough, there is a small window of opportunity for rain to change to snow and sleet before ending. It certainly is not a guarantee that this changeover occurs, as conditions need to align perfectly and have a short time to do so. Surface temperatures may even become cold enough for some light accumulations and a few slick spots on roads in southwest Mississippi. There, a WINTER WEATHER ADVISORY has been issued through 9am Tuesday. 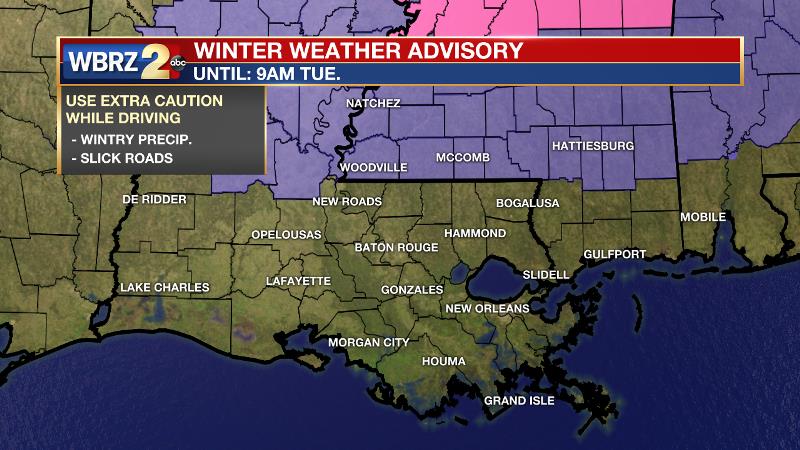 Elsewhere, thermometers will remain above freezing meaning that no matter what falls, no issues are expected to develop. By afternoon, some sun will return allowing high temperatures in the upper 30s and low 40s. This, in addition to northwest winds of 10-15mph will be very important in drying out any leftover moisture on the ground and preventing icy spots as lows plummet into the mid and upper 20s by Wednesday morning. A hard freeze is possible, especially along and north of I-12, so if you have not yet done so, it would be advisable to wrap exposed outdoor pipes, faucets and hoses.

A surface high pressure system will remain in control through Monday until a large, longwave trough surges southeastward from Canada into the Eastern U.S. Due to the high moving east of the area, south winds will allow temperatures to warm into the upper 60s with some continued sunshine. The trough will then make its appearance known overnight beginning with a line of rain along a strong arctic cold front.

Morning! Certainly, the "town talker" is weather anytime wintry precip. is possible in the #BatonRouge area. The window of opportunity is small and impacts are likely to be minimal. Time to wrap pipes today? Do it before bitter cold Tuesday night! | MORE: https://t.co/7iKfZsuCcm pic.twitter.com/LCv8e5tNxG

Precipitation is expected to begin (in liquid form) around midnight, overspreading the area from northwest to southeast. Cold air will rush in behind the boundary, aloft first and then down to the surface. This may allow liquid precipitation to briefly turn into sleet or snow just prior to ending. Of course, the forecast is very sensitive to the arrival time of the column of cold air. With the exception of the advisory area in southwest Mississippi, surface temperatures will likely remain just above freezing meaning that even if any snow or sleet does occur, it should not have an impact on roads. As far as accumulation is concerned, it would mainly be on grassy surfaces and could be as much as a half inch to an inch in southwest Mississippi, with little more than a coating south of that to about I-12. Dry air will cut off precipitation from northwest to southeast shortly after dawn on Tuesday. The thermal trough will scoot east just as quick allowing some sunshine to return. This will work against the northwest winds of 10-15mph to actually allow just a bit of warming back into the 40s on Tuesday afternoon. These two factors are very important in that sufficient drying of lingering moisture is expected so that no icy surfaces are expected as the heart of the cold air mass envelops the area Tuesday night. The coldest temperatures so far this season are expected and a hard freeze is possible north of I-12 with lows possibly dipping to 25 degrees for a few hours. Temperatures will moderate through the week beginning Wednesday afternoon with a return to 50 degrees and near normal readings by Friday. Additionally, an upper level disturbance will return rain chances by the weekend.