Soakers tapering from widespread to isolated Wed. to Fri.

While the FLASH FLOOD WATCH will expire on time Tuesday evening, some heavy showers and thunderstorms remain possible on Wednesday. Grounds are saturated due to 5 – 7 inches of rain since last Thursday so it will not take much for street and poor drainage flooding to occur. However, fewer rounds and slightly less areal coverage are expected.

The Next 24 Hours: Spotty showers remain possible overnight with otherwise mostly cloudy skies and seasonably muggy lows in the mid 70s. Wednesday will be transitional as the number, coverage and duration of showers and thunderstorms will cut back. Still, the forecast is for widespread activity with a few downpours. The afternoon should be busier than the morning. Highs have a shot at the upper 80s with more breaks in the action.

The Long Term Trend: Thursday and Friday look primarily dry but the consequence of that is warmer temperatures. Highs will find their way into the 90s. Either afternoon, just a stray shower or storm is possible. Over the weekend, a weak cold front will come into the area. Don’t get too excited; we are not expecting any temperatures changes, rather this boundary will provide a focus for scattered showers and storms—some could be strong. One other bonus, the front may deflect a tropical system approaching from the east. 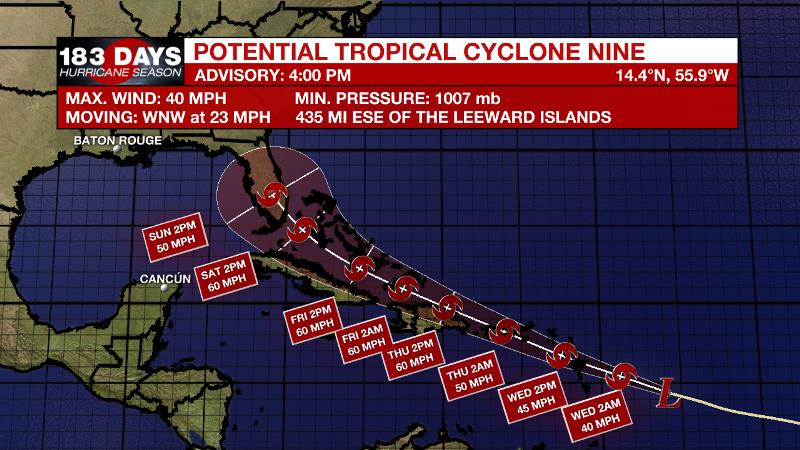 The Tropics: On Tuesday, the National Hurricane Center designated Potential Tropical Cylone Nine. This means a storm has not officially formed, but is expected to do so and affect land within 48 hours and therefore, watches and warnings have been issued. Nine will likely become Tropical Storm Isaias before reaching the U.S. and British Virgin Islands and Puerto Rico Wednesday and Thursday. Nine is forecast to continue west-northwest at 15-20mph with some strengthening possible as it meanders over island nations in the Caribbean. The long-term outlook projects the system near Florida by early next week. However, it is important to keep in mind that without a developed storm and well-defined circulation, long-term forecast are less reliable and more variable.

The Explanation: An inverted upper level trough of low pressure over Texas will continue to feed moisture to the central and western Gulf Coast through Wednesday. This moisture will be sufficient to kick out scattered or widespread showers and thunderstorm despite a slight decrease of instability. The instability will continue to decrease on Thursday and Friday as a weak upper level ridge builds over the region. The warmer, drier atmosphere will result in far fewer showers and storms though some isolated convection could develop near marine breezes during the peak heat of the day. On these drier days, high temperatures will return to normal levels in the low 90s. 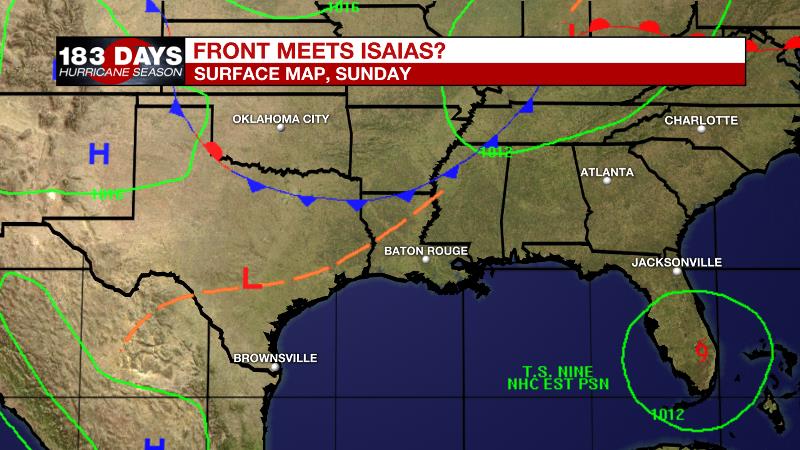 Over the weekend, a positively tilted longwave trough will slowly move into the Eastern U.S. and drive a weak cold front into the Southeast. This front will not have much cooling power but in combination with the associated trough, there will be another focal point for scattered to widespread showers and thunderstorms—especially Saturday through Monday. In addition to providing the next round of active weather, the front and trough will combine to keep any tropical system (Isaias) away to the east. Once that trough breaks east as well, average conditions should be on tap for early August.