Tonight and Tomorrow: Partly cloudy skies and a mild night ahead. Temperatures will be cooling into the 70s around 11 PM, as overnight lows drop to near 66° with calm winds. Mostly sunny skies through Monday morning, but clouds will be increasing through the afternoon hours. Showers and storms will be developing after 4 PM, and should linger through Tuesday. Highs will reach near 82° with light winds out of the east. 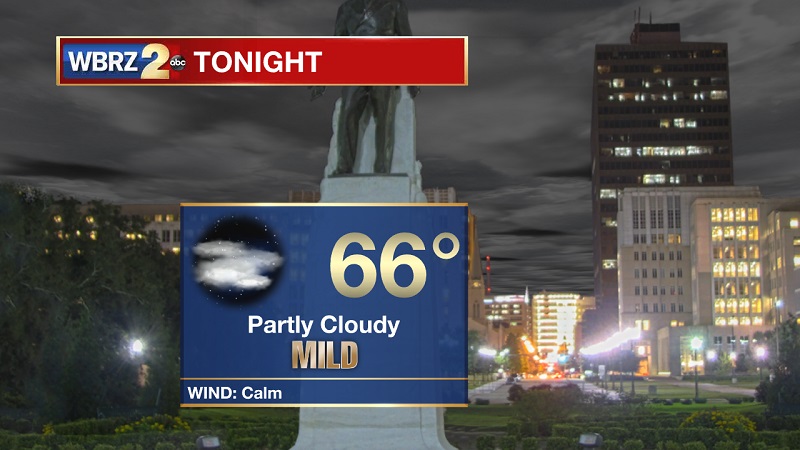 Up Next:  Temperatures staying in the low-to-mid 80s to start the workweek, as scattered showers and storms stay through Wednesday morning. 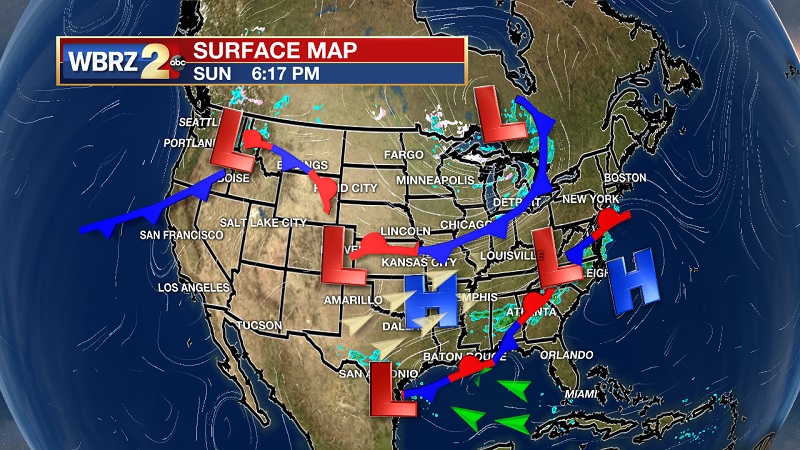 Tropical Storm Melissa continues to weaken over the open north Atlantic. Currently located 405 miles southeast of Halifax, Nova Scotia, with 40 mph sustained winds and moving east-northeast at 18 mph. This motion is expected to continue through tonight. A further increase in forward speed and a turn toward the east are expected on Monday, with that motion continuing into Wednesday. Additional weakening is expected, and Melissa is forecast to become a post-tropical remnant low later tonight or early Monday. 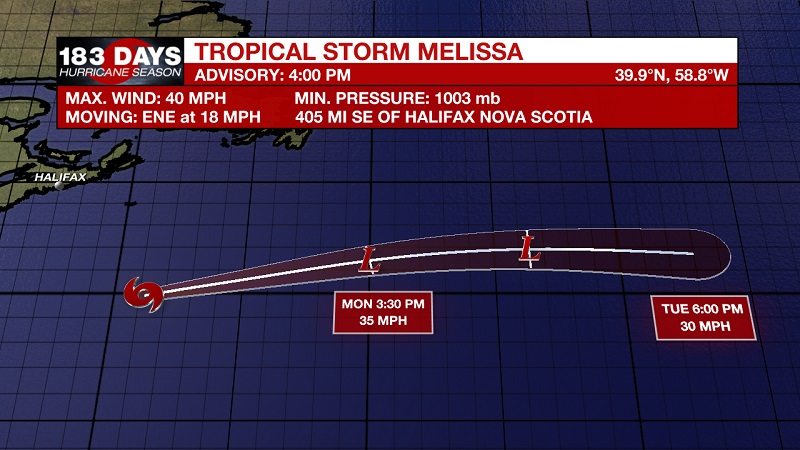 We are currently monitoring three waves in the tropics.

The first is a vigorous tropical wave that is accompanied by a well-defined low pressure system that has emerged over the far eastern tropical Atlantic Ocean just west of the coast of Guinea-Bissau. Showers and storms are beginning to show signs of organization, and environmental conditions are expected to be conducive for the development of a tropical depression during the next few days while the disturbance moves west-northwestward to northwestward over or just east of the Cabo Verde Islands. Strong upper-level winds should prevent any significant development by midweek. The National Hurricane Center is forecasting a 50% chance of tropical development within the next 2 days, but that increases to a 70% chance within the next 5 days.

The second is a broad area of low pressure located along the coast of northeastern Nicaragua that is producing disorganized showers and thunderstorms over most of the southwestern Caribbean Sea, Gulf of Honduras, and much of Central America. This system is forecast to continue moving west-northwestward across northern Nicaragua, northern Honduras, southern Belize, and northern Guatemala, which will inhibit tropical cyclone formation for the next couple of days due to land interaction. By Wednesday, however, the disturbance is forecast to emerge over the southern Bay of Campeche where conditions could become a little more conducive for some organization to occur. Regardless of development, this system is expected to produce heavy rains over portions of Central America during the next few days, which could cause flooding and mudslides, especially in mountainous areas. The National Hurricane Center is forecasting a 10% chance of tropical development within the next 2 days, but that increases to a 20% chance within the next 5 days.

The third is a tropical wave located over the central tropical Atlantic and is producing disorganized thunderstorm activity and strong gusty winds to near gale force in the northern portion of the wave. Upper-level winds are expected to be only marginally conducive for development to occur during the next few days while the system moves westward at around 15 mph. By late Wednesday as the disturbance approaches the southern Lesser Antilles, upper-level winds are forecast to become quite hostile for any significant development to occur. The National Hurricane Center is forecasting a 10% chance of tropical development within the next 2 days, increasing to a 20% chance within the next 5 days. 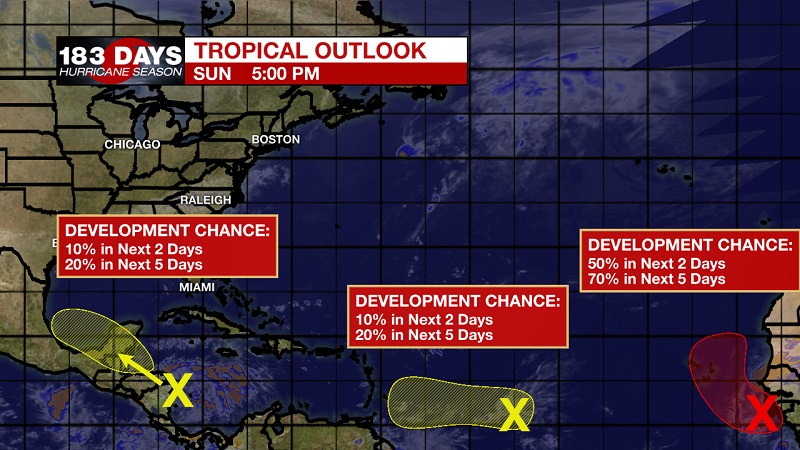 The surface high over the Deep South will be slow to move northeast through Monday, keeping northeast to east winds at the surface. These wind directions will help to keep skies sunny to start the workweek. Flow will begin coming out of the southwest through the day though, allowing for showers to develop as temperatures break into the low 80s through the afternoon. This will again stay the course into Tuesday, as another cold front from the strong low pressure located near the Great Lakes region begins to move toward the northeast and into Canada. This front should push through Wednesday morning, drying conditions through the afternoon hours, and dropping high temperatures back into the low-to-mid 70s Wednesday and Thursday.