The Baton Rouge area will warm up slightly into Tuesday; however, another front will bring a few showers and then reinforce the cold air mass soon after. A considerable chill will be in the air for Thanksgiving.

Today and Tonight: For Tuesday, temperatures will climb a bit more than Sunday or Monday, into the upper 60s with increasing clouds. As a cold front and upper level disturbance move into the region, showers are possible—especially south of I-10. Rain chances will increase between 4pm and 11pm. Overnight will be mostly cloudy with lows in the low 50s. Winds will shift from east to northwest but remain light at 5mph. 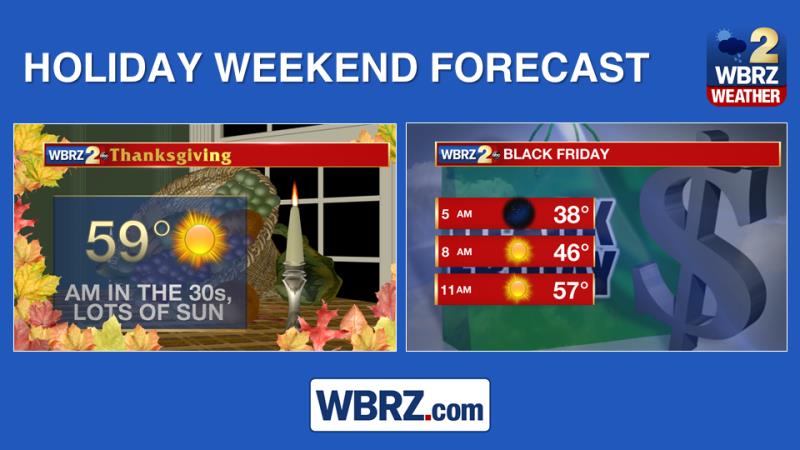 Up Next: Another cold front will be through the area on Wednesday. Skies will again go mainly clear and stay that way for the foreseeable future. Local travel will be in fine shape with mainly clear skies and cool temperatures. In fact, the only areas of the United States that might have to deal with rain and subsequent delays would be the Pacific Northwest and possibly the Northeast. The passing front will also keep temperatures below average through Sunday. Thanksgiving may well be the chilliest afternoon with highs struggling to reach 60 despite sunshine. Friday morning will be another one in the 30s, so if you plan to go shopping early in the morning, bring some warm clothing.

Football Forecast: In Baton Rouge, LSU fans will take in one final tailgate with excellent weather conditions. After a chilly start in the low 40s, sunny skies will send afternoon highs toward 70 degrees. Under the night lights, thermometers will fall back through the 60s. So, bring layers, as you will need cover in the morning and evening with a bit less for the afternoon. In New Orleans, the same forecast can be issued for the Bayou Classic. Of course, played indoors, you will not need that extra layer during the game.

A split flow pattern will begin developing by Tuesday afternoon. Amplification of troughs in each jet stream will occur over the Eastern U.S. sending a reinforcing cold front through the region Tuesday night. With considerable positive vorticity advection ahead of the associated shortwave, a batch of clouds and showers will develop ahead of the front. High-resolution models suggest the possibility of showers between 4pm and 10pm, especially for areas south of I-10 and toward the Atchafalaya Basin. The frontal passage will occur overnight, ending what little moderation occurs on Tuesday and will bring temperatures back down to a good 5 to 10 degrees below average Wednesday though the end of the week. The region will generally remain under a trough through the weekend. This will keep rain chances out of the picture and temperatures at to slightly below normal.