Shot at some tropical showers on Monday

A disturbance moving across the northwest Gulf of Mexico will bring this week’s best shot of showers and thunderstorms. Otherwise, hot temperatures are expected to continue.

Today and Tonight: Your Monday will be partly sunny with a high temperature climbing for the low 90s. A few bands of showers and thunderstorms may brush inland in association with a weak disturbance in the Gulf. These showers could be briefly heavy, creating some pockets of street and poor drainage flooding. Overall though, any rain that does fall will be beneficial. Overnight, gradual clearing is expected with a low temperature in the mid 70s.

Up Next: Rain chances will become extremely limited again for the remainder of the week. Hot and dry will be the trend for this forecast period stretching through at least next weekend. As it appears, cooler weather will remain elusive through the end of the month.

The Tropics: Hurricane Humberto continues to strengthen with large swells affecting much of the southeastern United States coastline. As of 7am Monday, maximum sustained winds were 85mph with a minimum central pressure of 980mb. Humberto was moving east, northeast at 5mph and is expected to accelerate northeastward through the end of the week. Bermuda will need to monitor the progress of this storm for potential impacts on Wednesday and Thursday. 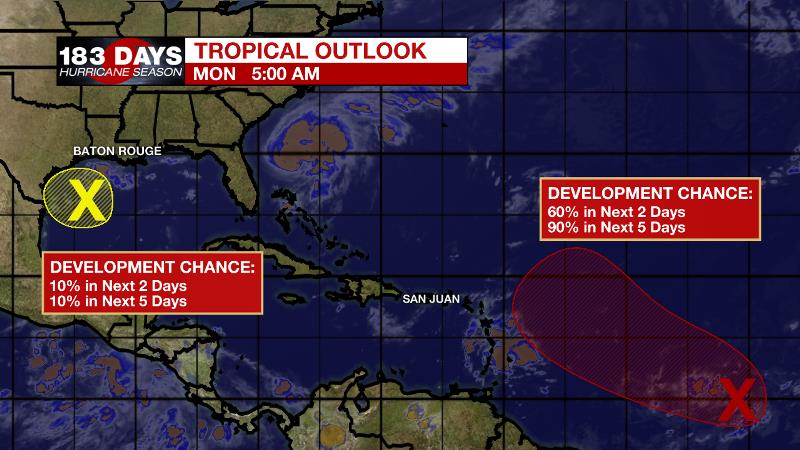 A disturbance in the northwestern Gulf will drift toward the coast of Texas and has a minimal, 10 percent chance of development. However, this system could bring heavy rain to parts of southwest Louisiana and Texas through the end of the week. Another wave located between the Cabo Verde Islands and Lesser Antilles is likely to become a tropical depression over the next two days as it moves to the west, northwest.

Dry, continental air lies just north of the forecast area with a humid, tropical air mass along the Louisiana coast. The moisture is associated with a tropical disturbance in the western Gulf of Mexico. While development of this system is not expected, it could fling some bands of rain far enough north to bring showers and thunderstorms to the forecast area Monday and Tuesday. While the rain will be beneficial, where it falls heavily, some street and poor drainage flooding could occur briefly. Once the disturbance moves across Texas on Tuesday and Wednesday, drier air will be restored across the local area and well above average temperatures will continue. A weak front may move into the area by Thursday or Friday but it is not expected to modify temperatures or dew points much. It may be able to stir up a shower but even that is not a good bet. While the end of September is a time we start to see some fronts making it into the region, there is no immediate sign of a passage and the Climate Prediction Center is calling for above average temperatures and drier conditions to end the month.