Seasonable ahead of weekend rain

Continued clear skies and seasonable temperatures are expected in southeast Louisiana and southwest Mississippi. We are monitoring the potential for a more significant rainmaker this weekend.

Up Next: Yet another weather repeat comes on Thursday. Approaching the weekend, an increase in clouds is expected with an isolated shower possible on Friday. Right now, the bulk of the rain and thunderstorm activity looks as though it will occur on Saturday. Forecast details will remain unclear until model guidance gets a better grip on the system Thursday. However, at this time, the potential is there for some heavier rain.

Something @WBRZweather will be watching... until this storm system moves into the western U.S. and can be better sampled for forecast models, details will be sketchy. #LaWX #MsWX pic.twitter.com/ezlXyuzNdo

Behind the front, seasonable temperatures are expected to persist. Hopefully, the current forecast holds in clearing skies out in time for the first Baton Rouge area Mardi Gras parade—the Mystic Krewe of Mutts! As the calendar flips to February, the Climate Prediction Center is anticipating above average temperatures for the central Gulf Coast. 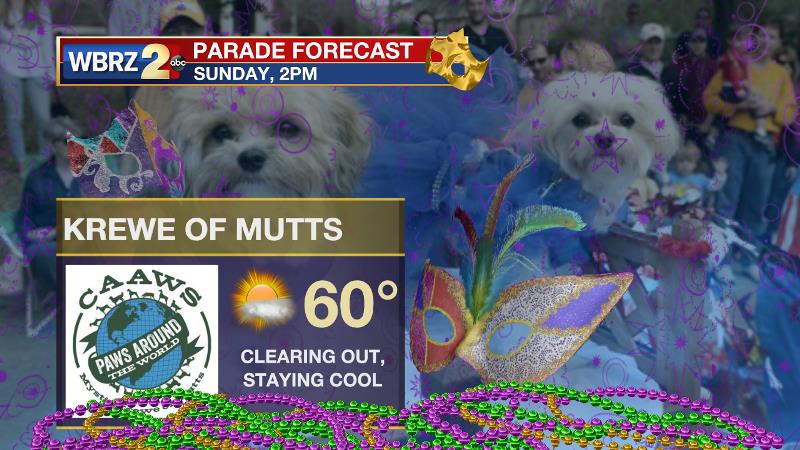 A largely zonal flow will prevail through the end of the week as a surface high pressure system basins over the central Gulf Coast on Wednesday. As a result, mainly clear skies and seasonable temperatures will continue. Clouds will begin to increase on Friday thanks to the development of deep southwest flow and resulting moisture return interacting with an area of positive vorticity advection in the mid-levels. A shower is possible. Then, an area of low pressure is expected to develop in the western Gulf of Mexico and possibly merge with a front. Depending on the track of this system, we will need to monitor the possibility of an area of heavy rain and maybe even some strong thunderstorms as well. Saturated mid-levels should result in overcast skies and a longer stretch of rain. At this time, forecast models are honing in on amounts between about a half of an inch and an inch. However, as noted by the National Weather Service, until the energy that will spawn this system moves out of the Pacific Ocean and into the upper air network of the western U.S., details of this system will remain sketchy. We should have a better handle on it by Thursday afternoon. Like Monday’s, the Canadian connection does not seem to be there with the weekend cold front either, so it does not seem that a serious cold spell looms behind this one. However, we can still expect some lows in the 30s and potentially near freezing temperatures.