Saturday PM Forecast: Now that the rain is gone, bringing heat back into the forecast

After a rainy morning, the afternoon turned out pleasant just in time for the big game.

Tonight & Tomorrow: This afternoon temperatures will struggle to hit 70° as more cloud cover starts to build back into the area. Overnight dense cloud cover will only allow temperatures to fall into the mid-to-low 60s. A dense fog advisory is in effect from midnight tonight until 9am tomorrow morning for areas north of the I-10/12 corridor. We are expecting patchy dense fog leading to visibility reduced to ½ to ¼ mile. Once the sun begins to rise we will start to see the fog break up. The cold front that moved through early Saturday morning will move back into the area as a stationary front then retreating northwest as a warm front. This will allow for more moisture to return to the forecast fro Sunday. By the afternoon hours temperatures will be well above average in the low-80s. Warmer temperatures plus some added moisture is the perfect recipe for a quick afternoon pop up shower. Not forecasting a total washout, if you do see rain showers will be brief. Into the evening hours cloud cover continues to move out and we have a chance to see more fog starting Monday morning.

Up Next: Monday will bring more of the same hot and humid pattern for the start of your work week. We will likely see more fog across the area in the early morning hours. There will be plenty of moisture but just not enough to produce rain again. Daytime highs will get back into the upper 80s. Temperatures will be holding well above average for this time of year for a couple of days this week. Rain stays out of the forecast for the entire workweek. Click here to see the 7-day forecast. 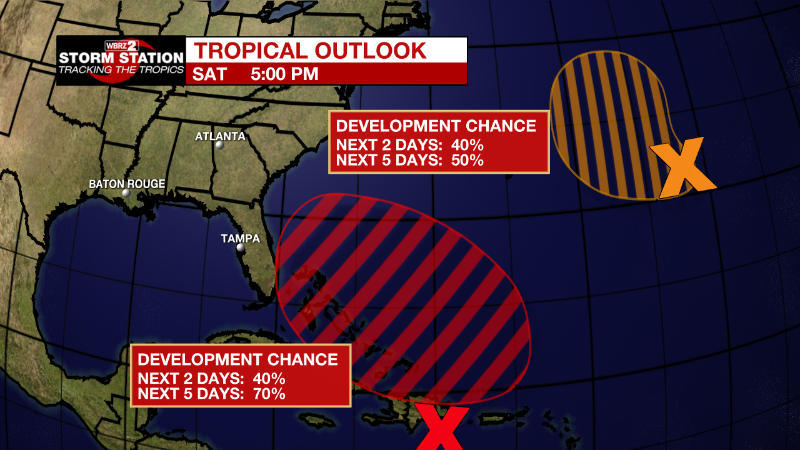 There are two disturbances in the Atlantic that are not a threat to the local area.

Southwestern Atlantic:
A trough of low pressure located over the eastern Caribbean Sea is
producing a large area of disorganized showers and thunderstorms.
The trough is forecast to move northward over the southwestern
Atlantic by Sunday, where a broad area of low pressure is expected
to form north of Hispaniola.  Environmental conditions are forecast
to be conducive for gradual development, and a subtropical or
tropical depression could form during the early part of next week
while the system moves generally westward to west-northwestward over
the southwestern Atlantic.  Regardless of development, there is an
increasing risk of coastal flooding, gale-force winds, heavy
rainfall, rough surf, and beach erosion along much of the
southeastern United States coast, the Florida east coast, and
portions of the central and northwestern Bahamas during the early
to middle part of next week.  The disturbance is also expected to
bring locally heavy rainfall to Puerto Rico and the Virgin Islands
this weekend.  Interests in those areas should monitor the progress
of this system.
* Formation chance through 48 hours...medium...40 percent.
* Formation chance through 5 days...high...70 percent.

Central Subtropical Atlantic:
Showers and thunderstorms associated with a non-tropical area of
low pressure located several hundred miles east of Bermuda are
beginning to show signs of organization.  The system is producing
gale-force winds, and is currently attached to a frontal system.
The front is forecast to decay during the next day or so, and
environmental conditions are expected to be conducive for some
additional development.  A tropical or subtropical depression
could form within the next few days while the system moves
northwestward, and then turns northeastward over the central
Atlantic.  After that time, the low is forecast to merge with a
strong cold front ending the chance of further development.
Additional information on this system can be found in High Seas
Forecasts issued by the National Weather Service.
* Formation chance through 48 hours...medium...40 percent.
* Formation chance through 5 days...medium...50 percent.