BATON ROUGE - Reports says newly-uncovered documents have identified the person who acted as the middleman for the "strong-ass offer" LSU coach Will Wade allegedly made in the recruitment of a basketball prospect.

According to Yahoo Sports, the man referenced in the now-infamous phone call is Shannon Forman, a well-known person in Baton Rouge basketball circles and a person Freshman guard Javonte Smart has reportedly called his "mentor" in the past.

The call between Wade and Christian Dawkins, an agent entangled in a larger college recruiting controversy, was reportedly intercepted by the FBI and includes a frustrated Wade complaining that another party affiliated with the recruitment had not accepted the "offer." It now appears Forman was the third party referenced in that conversation. 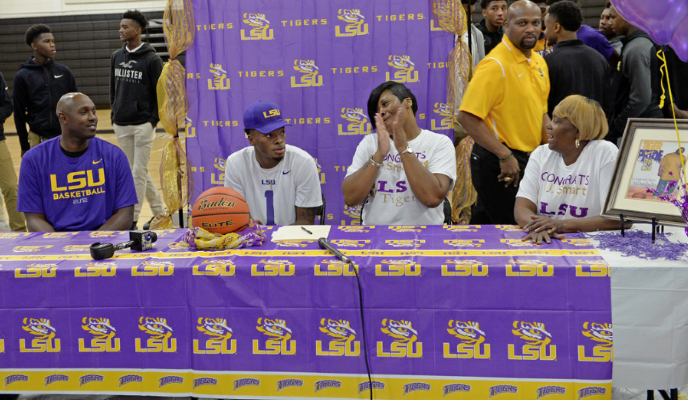 Shannon Forman with Smart on signing day (via the Advocate)

According to the Yahoo report, Wade theorized a verbal commitment to LSU was being delayed because he hadn't given Forman a big enough "piece of the pie in the deal” and instead “tilted” the offer toward the player and his mother.

Wade has been suspended since early March when news of the FBI wiretap first broke. Wade has remained suspended through the Tigers' NCAA Tournament run, despite calling for his own reinstatement.

You can read the full Yahoo report by clicking here.