WASHINGTON (AP) — A North Carolina man who claimed to have a bomb in a pickup truck near the U.S. Capitol surrendered to law enforcement after an hourslong standoff Thursday that prompted a massive police response and the evacuations of government buildings in the area.

Authorities were investigating what led the suspect, identified as 49-year-old Floyd Ray Roseberry, to drive onto the sidewalk outside the Library of Congress, make bomb threats to officers and profess a litany of anti-government grievances as part of a bizarre episode that he live-streamed for a Facebook audience. 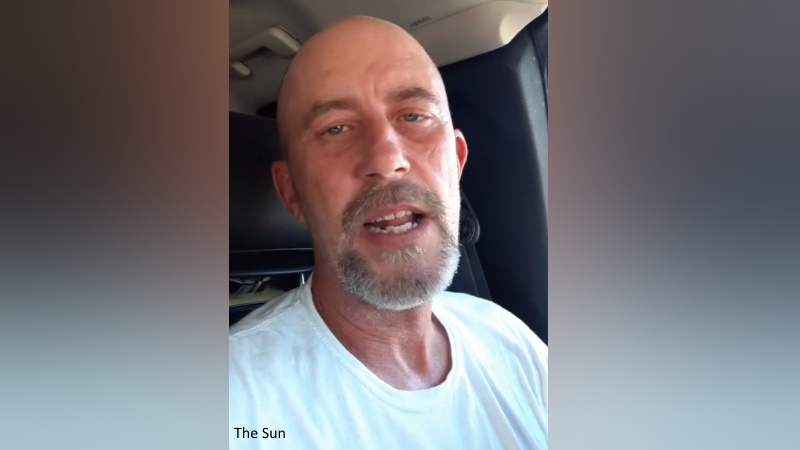 Police later searched the vehicle and said they did not find a bomb but did collect possible bomb-making materials.

The standoff was resolved peacefully after roughly five hours of negotiations, ending when Roseberry crawled out of the truck and was taken into police custody.

UPDATE: The vehicle related to the active bomb threat near the library of Congress has been cleared. Road closures that were in place have now been lifted.

Residents may return to their homes. Thank you all for your patience during this critical incident.

But even in a city with a long history of dramatic law enforcement encounters outside federal landmarks, this episode was notable for its timing — Washington remains on edge eight months after the insurrection at the U.S. Capitol — and for the way the suspect harnessed social media to draw attention to his actions in the hours before his arrest.

Authorities who spent hours negotiating with Roseberry — he held up handwritten signs through his driver-side window — were continuing to dig into his background Thursday evening. They did not reveal any details about a motive, and no charges were immediately announced.

Investigators had been speaking with members of Roseberry’s family and learned that his mother had recently died, Capitol Police Chief J. Thomas Manger said. “There were other issues he was dealing with,” the chief said, without providing specific details.

But social media appeared to offer its own clues.

As police continued negotiations, video surfaced of Roseberry on Facebook Live inside the truck, which was stuffed with coins and boxes. He threatened explosions, expressed hostility toward President Joe Biden, profanely warned of a “revolution” and laid bare a series of grievances related to U.S. positions on Afghanistan, health care and the military.

Roseberry’s ex-wife, Crystal Roseberry, said she had seen images of the man in the standoff at the Capitol and confirmed to The Associated Press that it was her ex-husband. She said she had never known him to have explosives, but he was an avid collector of firearms.

Videos posted to Facebook before the page was taken down appear to show Roseberry at a Nov. 14 Washington rally attended by thousands of Trump supporters to protest what they claimed was a stolen election. One video appears to be filmed by Roseberry as he’s marching with a crowd of hundreds of people carrying American flags and Trump flags and shouting “stop the steal.”

Thursday’s incident began around 9:15 a.m. when a truck drove up the sidewalk outside the library. The driver told the responding officer he had a bomb, and he was holding what the officer believed to be a detonator. The truck had no license plates.

Kelsey Campbell, a student at the University of Wisconsin-Madison visiting Washington as part of a class trip, said she and another student encountered Roseberry around 9:20 a.m. outside the nearby Supreme Court building. Campbell said he was with his truck, which was parked next to the sidewalk, and was holding a large stack of dollar bills.

“He said, ‘Hey, call the police, tell them to evacuate this street, and I’ll give you all this money,’” Campbell recounted to The AP. “I said, ’No!’ and he threw the money at us and we started running.”

Campbell said she and the other student saw some police officers standing nearby. They told the officers what happened, and the officers then went to confront Roseberry.

The standoff brought the area surrounding the Capitol to a virtual standstill as police emptied buildings and cordoned off streets as a precaution. Congress is in recess this week, but staffers were seen calmly walking out of the area at the direction of authorities.

By Thursday evening, authorities had finished searching the vehicle and determined the area to be safe after not finding an explosive.

The nation’s capital has been tense since the Jan. 6 insurrection at the Capitol, when thousands of supporters of then-President Donald Trump stormed the building as Congress was gathered to certify the results of the presidential election.

The RNC, not far from where the truck was parked Thursday, was also evacuated over the threat. A spokesman for the DNC said its headquarters, which is located farther away from the truck’s location, was put under lockdown, but that lockdown has been lifted.

Thursday’s incident marked the third time in as many weeks that federal and military law enforcement authorities had to respond to attacks or possible threats in the Washington area. Officials are also jittery over a planned rally in September.