Once Sally departs east, drier air will move in

The tropics are super busy, headlined by Hurricane Sally just east of the local area. A weak cold front is expected to deliver some pleasant weather as we approach the weekend.

The Tropics: Hurricane Sally will continue to crawl toward the Mississippi and Alabama coasts through Wednesday morning. Battering surge and torrential rain will create significant coastal and inland flooding. In addition, tropical storm force winds with gusts to hurricane strength will down trees and powerlines. 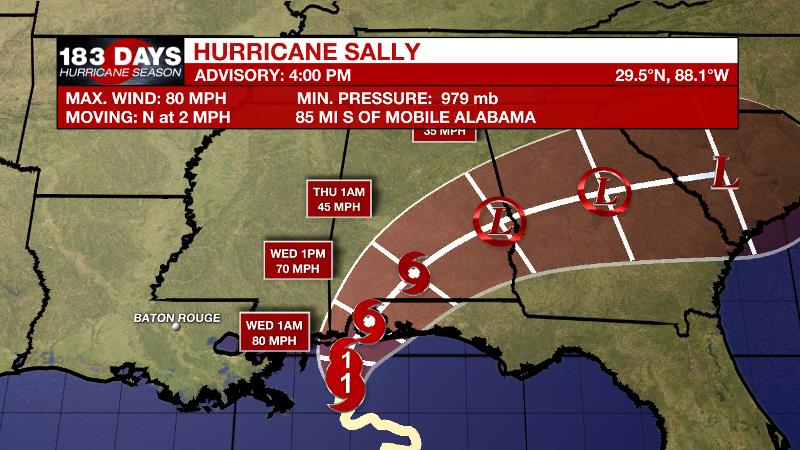 Hurricane Paulette will continue to weaken as it pulls away from Bermuda. The storm will become extratropical over the open Atlantic during the next few days. Tropical Storm Teddy will become a hurricane by Wednesday. This storm will strengthen into a major hurricane well north of the Virgin Islands, but Bermuda will have to monitor this one. Tropical Storm Vicki will dissipate over the far eastern Atlantic during the next few days. 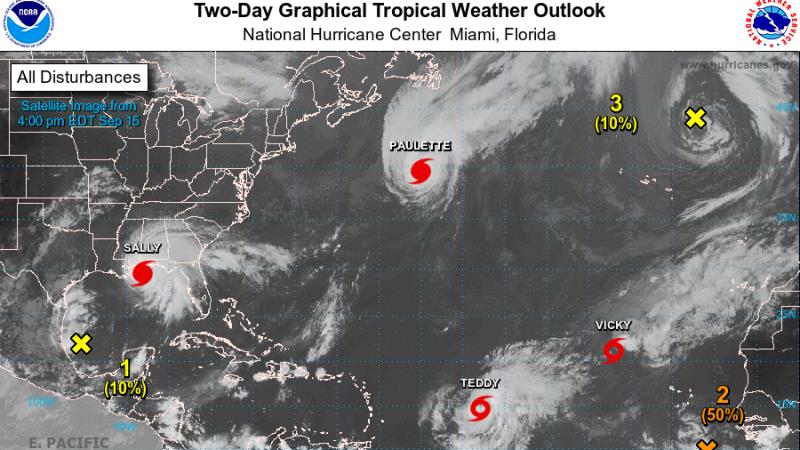 Showers and thunderstorms associated with an area of low pressure located southeast of the Cabo Verde Islands have changed little during the past several hours. Environmental conditions are conducive for development of this system and there is a 70 percent chance that a tropical depression forms as this system moves west across the Atlantic.

An elongated area of low pressure over the southwestern Gulf of Mexico is producing disorganized showers and thunderstorms. There is a 20 percent chance of formation over the next 5 days.

A non-tropical area of low pressure is located over the far northeastern Atlantic Ocean several hundred miles northeast of the Azores.  This system is forecast to move southeastward during the next few days where it will encounter warmer water temperatures, and has a 20 percent chance of formation.

The Next 24 Hours: Locally, the cloud canopy associated with Sally will continue to cover the area through tonight. An isolated rain band could pass the area from time to time, but many spots will miss showers. Expect lows in the mid 70s. Breezes will remain elevated, out of the north at 10-15mph. Wednesday will be partly sunny to mostly cloudy with spotty showers and highs in the upper 80s.

After That: By Thursday, winds will subside as a weakening Sally pulls away from the region. For the final two days of the workweek, expect partly sunny skies and highs in the upper 80s. Light, north winds will keep the atmosphere rather dry so it should feel a little less humid and showers will be tough to find. Another weak cold front will move through the area Thursday and this could lead to a nice stretch of subtlety cooler, drier conditions. Friday, Saturday and Sunday will be mostly to partly sunny with highs in the mid to upper 80s and lows in the upper 60s. Dew points down into the low 60s will mark a noticeable drop in humidity. 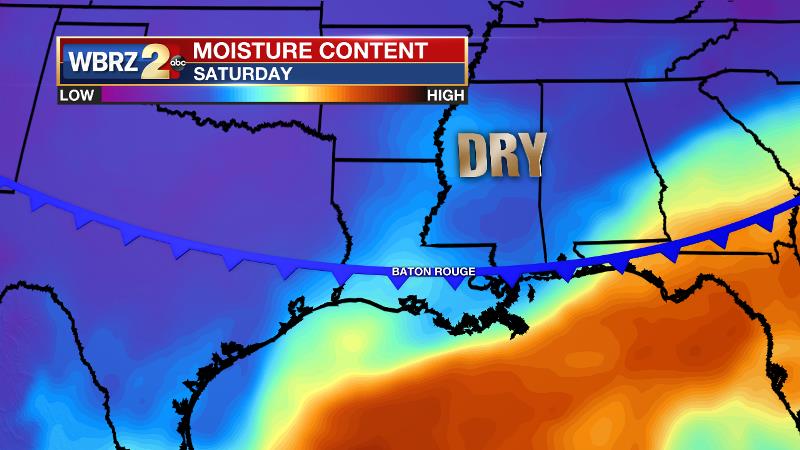 The Explanation: Subsidence between Sally to the east and another trough to the west will maintain mostly dry conditions through the end of the week. Northerly winds will also dry the surface out a touch as well. By Thursday, a series of weak troughs moving across the Northeast U.S. will cause a trough to deepen far enough into the Southeast U.S. that a weak cold front will push toward the Gulf Coast. Lower dew points and therefore cooler low temperatures are expected in northern areas starting Thursday and Thursday night and in coastal areas by Friday. This will also limit rain chances to mainly coastal area by Friday. A weak disturbance moving across the Gulf may tag up with the front stalling in the northern Gulf to spew a few showers into nearshore areas early next week. However, the inland locations such as Baton Rouge should continue to enjoy the slightly cooler and less humid conditions.