Nice weather pattern after the clouds

After a damp and cool weekend, a steady warming trend begins by the middle of the week. Rain chances will be minimal.

Today and Tonight: Overcast skies from the weekend are not expected to break much through Monday. Perhaps a few breaks in the clouds will be possible during the second half of the day and for those locations that do grab some sun; the low 70s are more likely. Beneath the cloud deck all day, upper 60s may be as warm as it gets. Some mist or drizzle is possible too, but not measurable rain is anticipated. Winds will be light and northerly. Tonight will be mostly cloudy and cool with lows in the low 50s. 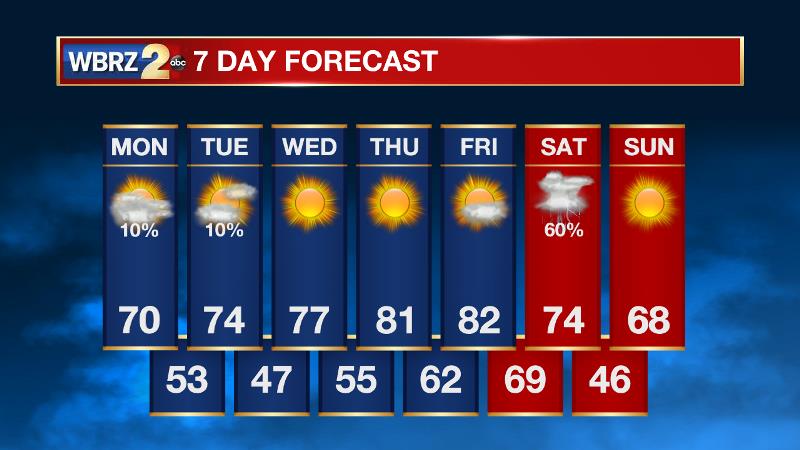 Up Next: As a cold front pushes through on Tuesday morning, it will flush out the cloud cover and nicer conditions will return for the remainder of the week. Highs will warm by about three degrees each day, finding the 80s by Thursday and Friday afternoon. The next impact weather is expected early in the weekend as a cold front brings rain and thunderstorms.

A broad upper level trough over the eastern half of the United States will begin to push east Tuesday. Moisture from the Gulf of Mexico is moving over cool surface air and causing the low cloud deck that has been persistent for most of the weekend. Therefore, the cool and damp feel may continue through Monday although any breaks of sun will result in quick warming during the afternoon hours. Where clouds are thicker and more stubborn, some patchy mist or drizzle is possible but no organized precipitation is expected. A weak cold front will move toward the area on Tuesday but is going to be falling apart. The boundary should have enough forward progress to sweep away residual moisture and allow clouds to break. High pressure settling southward from the Upper Midwest will bring quiet and nice conditions through the remainder of the week. As the high shifts to the southeast and wind turn around, temperatures will moderate by a few degrees each afternoon, reaching the 80s by the end of the week. A trough moving across the United States later this week into the weekend will push another cold front across the area. While the upper level features are not particularly impressive, forecast models are indicating enough instability and low-level wind shear that we will need to monitor this system for the possibility of severe weather.