Monday PM Forecast: rounds of rain in the coming days

A wet week is ahead. While scattered showers are possible Tuesday and Wednesday, some steadier and heavier rain is expected on Thursday.

Next 24 Hours: Clouds will increase through the night as a weak storm system approaches from the west. By dawn, a couple of showers may develop. Low temperatures will stop in the mid 50s. A warm front will lift through the area on Tuesday. This feature will be responsible for mainly cloudy skies and off and on showers. Despite the gray day, southeast winds of 10-15mph will cause high temperatures to push the upper 60s.

Up Next: In between the warm front and an approaching cold front, Wednesday will stay mostly cloudy with just a few showers possible—not a washout. Afternoon highs will climb into the low 70s. More impactful weather will arrive on Thursday. A slow-moving cold front will push into the area and it will deliver a bout of rain and thunderstorms. Since the front will not be moving quickly, rain will gradually add up to two or three inches. While major flooding is not a concern, some standing water and poor drainage issues could arise anywhere those amounts occur in just a few hours. Additionally, the afternoon and evening commute on Thursday could be difficult due to the steady rain. By Friday morning, the front will start to edge east of the area, showers will slowly end from west to east and colder air will arrive with high temperatures stuck in the 40s. CLICK HERE for your detailed 7-Day Forecast. 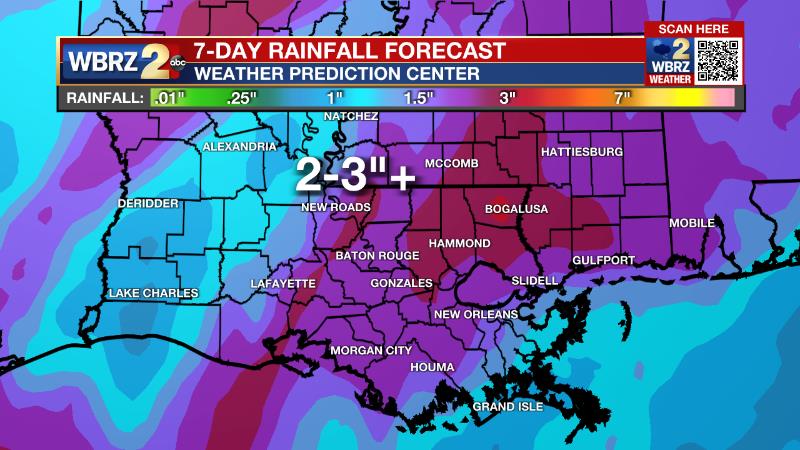 The Explanation: An upper level low pressure system tracking across central Texas will move over the western Gulf of Mexico tomorrow. It will be weakening into an open trough as it does so. Given that, expect a minimal chance for thunderstorms tomorrow but scattered showers are possible through the day as a weak surface low and warm front lift northeast through the forecast area. Some showers will linger across the area into Wednesday but the weakened nature of the low and front will mean there is not much of a mechanism to focus the showers and so the activity will be sporadic. By Wednesday night and Thursday morning, the upper level pattern becomes more complex as one trough splits into two. As the southern part of the trough moves into Texas, showers and a few thunderstorms will develop on Wednesday night. The trailing part of the trough will send a cold front into the region enhancing showers and thunderstorms later Thursday. The concern with this event is at least some potential for flash flooding. Atmospheric moisture should be approaching record levels for the time of year Thursday. While that can be a signal for heavy rain, the National Weather Service notes that wintertime record moisture does not always lead to record rainfall. Still, an event total of two to three inches could be a healthy soak for the area as long as it comes in a day or two and not an hour or two. Colder air will spill in behind the front for the end of the week and early part of the weekend.