Honeybees are capable of simple math

The survival of the honeybee has been a worldwide concern over the last 10 years. This concern is warranted, since one-third of all food Americans eat is directly or indirectly derived from the honeybee population. The honeybee is an incredible insect, as they fly the equivalent of one and a half times the circumference of the Earth in their lifetime, which is only six to eight weeks long. Another amazing feat, is that honeybees have the ability to do simple addition and subtraction.

A new study from a team of Australian and French scientists have determined that bees are able to do basic arithmetic, even with their miniature brain. Arithmetic operations such as addition and subtraction problems are known to involve complex cognitive processes as they require two levels of information processing. The first is the representation of numerical attributes, and the second is the mental manipulation of those representations in working memory. The study was conducted in such a way that the bees needed to remember the initial problem in order to determine the correct answer.

In the study, 14 bees were trained to enter a Y-maze and view a sample problem which included a number of colored boxes of various shapes. The color of the boxes are associated with either addition (blue) or subtraction (yellow). The initial posting of shapes and colors are on the outside of the chamber, indicating the problem. Once inside the chamber, the bee then has the choice of two openings with colored boxes next to each opening. One opening is correct, and the other is incorrect. For example, a bee approaches the front of the chamber, which has three yellow boxes next to the opening. The bee then proceeds through the chamber into a room that has two openings. Next to one of the openings are two yellow boxes and the other has four yellow boxes. The bee would then fly through the opening with two boxes to achieve a correct answer. A diagram of the apparatus is below. 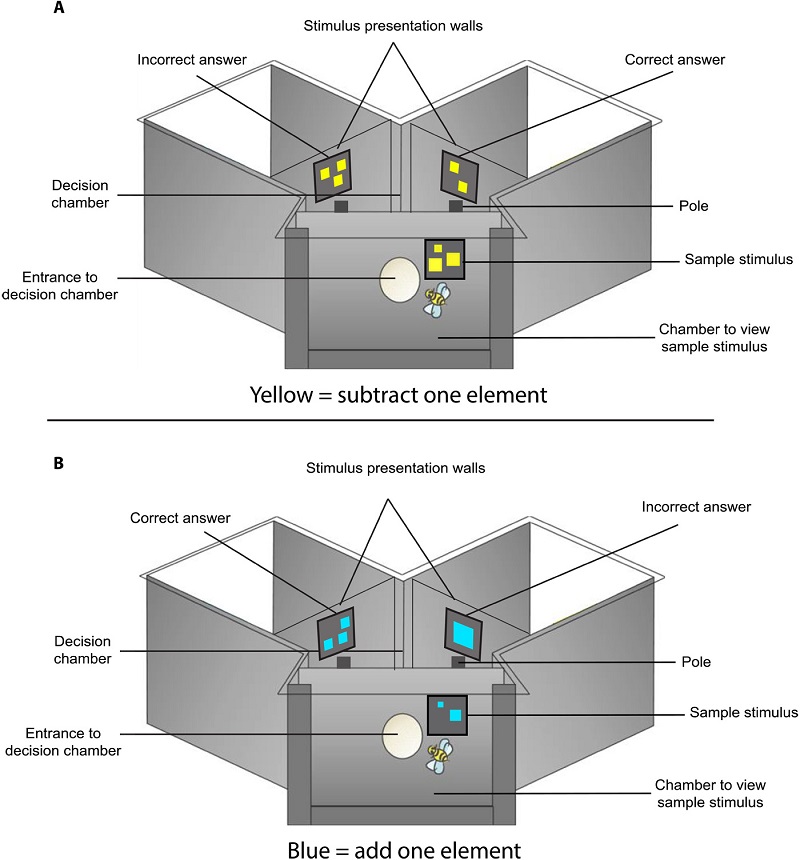 The training phase consisted of 100 rounds, where the 14 bees were given either a sucrose (reward) or a quinine (punishment) solution that was dependent on if their choice was correct or incorrect. Over the course of this phase, the bees learned the appropriate arithmetic rather quickly, going from less than 50% success to near 80%. The testing phase included four trials that did not incorporate a reward or punishment solution after they answered. Each bee has four math problems to brood over, two addition and two subtraction.

Through the testing phase, it was found that the correct answer was obtained between 70-75% of the time over all four questions. This study demonstrates that honeybees are capable of learning and applying numerical cognition as individuals. This study also suggests that honeybees and other animals may be biologically tuned for complex numerical tasks. The numbers that were used only ranged from 1 to 5, so additional research is required in order to determine the honeybee’s ability to calculate math consisting of higher numbers. When we think animals and math, usually what comes to mind are horses and chimpanzees, but this research now points to insects incurring the mental capacity of solving mathematical calculations. This new study opens the door to a new understanding about the adaptation and intelligence of some of the smaller creatures on our amazing planet. 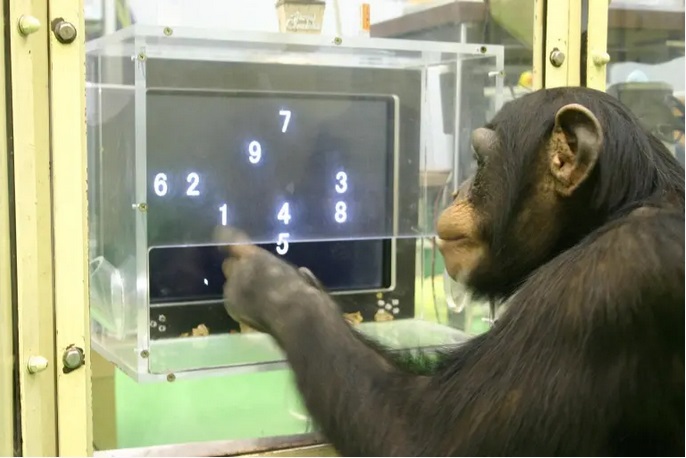 Image: AI, the chimpanzee that is able to add. She is also able to count and associate the amount of dots to a numerical value.