It will be a cold start to the weekend. However, clear skies will mean cooperative weather for any outdoor plans.

A FREEZE WARNING has been issued for Assumption and St. James Parishes from midnight to 8am Saturday. Temperatures of 32 degrees or lower for several hours could harm crops and sensitive vegetation.

Next 24 Hours: Due to clear skies and a low starting point from Friday afternoon, temperatures will easily drop below freezing by Saturday morning. Most areas north of I-10 will wake up in the upper 20s! Brisk, northerly winds of 5-10mph will cause feels-like temperatures in the low to mid 20s; you will want a hat and gloves if heading outside! Saturday afternoon will be dry and chilly with afternoon highs in the low 50s. Winds will gradually weaken.

Up Next: Thermometers will be near freezing to start the second half of the weekend but rebound into the 60s on Sunday afternoon thanks to light east winds and ample sunshine. Monday will be a transitional day as southeasterly winds restore low level moisture and push temperatures into the mid 60s. Clouds will increase through the day as a disturbance moves in from the west. This system will spread rain over the area Monday night into Tuesday afternoon. With no cold frontal passage, temperatures will stay above average and reach the 70s on Wednesday before a strong cold front delivers showers and thunderstorms Wednesday night into Thursday. It looks like a very cold air mass will build in behind that front. CLICK HERE for your detailed 7-Day Forecast. 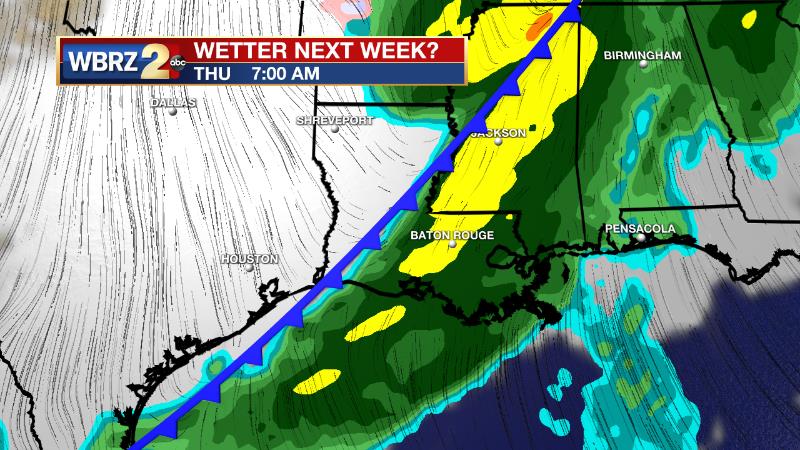 The Explanation: Low temperatures will dip into the upper 20s on Saturday morning for spots north of I-10. While the upper levels remain dry, a surface high pressure system will park just north and east of the area through the weekend resulting in clear skies. After a near freezing morning, Sunday afternoon will return to the 60s. Onshore flow will promote continued moderation on Monday in advance of an upper level trough of low pressure approaching from the west. This potent upper level disturbance will sweep through the forecast area Monday into Tuesday. A deeper pool of Pacific based moisture will feed into the area Monday night and Tuesday and this will rapidly moisten the mid and upper levels. Despite the very strong lift in the atmosphere, a lack of apparent instability will limit most of the precipitation to the form of showers as the system moves through on Tuesday.  In the wake of this, a zonal southwesterly upper level flow will remain over the region on Wednesday. This will allow moisture and warm air to continue to pile into the region, and an extended period of cloud cover, showers, and likely, some fog can be expected. Temperatures will remain warmer than average with highs climbing into the upper 60s and lower 70s and lows only dipping into the 50s. The fog could potentially be dense Wednesday night into Thursday morning. Thursday, another upper level trough of low pressure move through the area. Ample lift, strong upper level winds and a cold front should produce a line of showers and thunderstorms. This activity should sweep through during the day on Thursday, but the threat of severe weather appears to be lower due to lower shear and instability near the surface. Still, this system will need to be monitored over the coming days as any adjustments in the aforementioned parameters could increase the chance for severe weather.