Oakland, CA - On December 4, 2018, Excel Energy took an important step to act on the dire problem of climate change, announcing that it will reduce its carbon emissions 100% by 2050, with an interim target of 80% by 2030. Lila Holzman, who is the energy program manager of As You Sow – a non-profit organization that promotes environmental and social corporate responsibility implores Xcel, stating, “Investors applaud this important step toward addressing Xcel’s climate impact and transitioning to a more sustainable business model. By committing to such ambitious reductions, Xcel is positioning itself to thrive in the coming low-carbon energy economy.” She goes on to describe the pivot and change that energy companies are now needing to consider, “Those companies that choose to diversify away from fossil fuels and expand energy efficiency and use of renewable energy sources are positioning themselves to prosper in the new energy economy.”

Xcel Energy Inc., based out of Minneapolis, Minnesota, serves more than 3.3 million electric customers and 1.8 million natural gas customers in Minnesota, Michigan, Wisconsin, North Dakota, South Dakota, Colorado, Texas, and New Mexico. Xcel Energy attains most of its energy from its 13 coal plants, 7 of which are located in Colorado. Xcel is no stranger to green energy though. In October 6 of 2011, Excel set a world record for electricity from wind power in Colorado. In the early morning hours, 55.6% of the electricity used by Xcel’s 1 million customers came from three wind farms from across the Centennial State. They also own 2 nuclear and 27 hydroelectric plants across Wisconsin, Minnesota, and Colorado. They have recently built 4 biomass electricity plants, which produces electricity from organic fuel sources such as treetops, tree limbs, turkey litter, coal waste, wood waste, railroad ties, discarded tires, natural gas waste, and petroleum coke. There is also a plan to install biomass gasification technology at one of its plants that would produce energy from most waste that would otherwise end up in landfills.

This shift from fossil fuels to renewable energy is one that could have devastating effects on the weather and environment if not done quickly. Chief among the impacts of our emissions is the rise in global temperature.

That is why countries around the world have agreed to limit that warming to well below 2°C above the pre-industrial temperatures. This will require drastic and immediate emissions cuts, scaling up of energy solutions that are already in place, lower-carbon transportation, and increasing sustainable farming practices. This window is closing rapidly and will likely require new technologies to remove carbon from the atmosphere, since there is already so much that is currently present. The primary origin of greenhouse gas emissions has recently been passed from electricity generation to transportation, but power generation still sits at a close second. 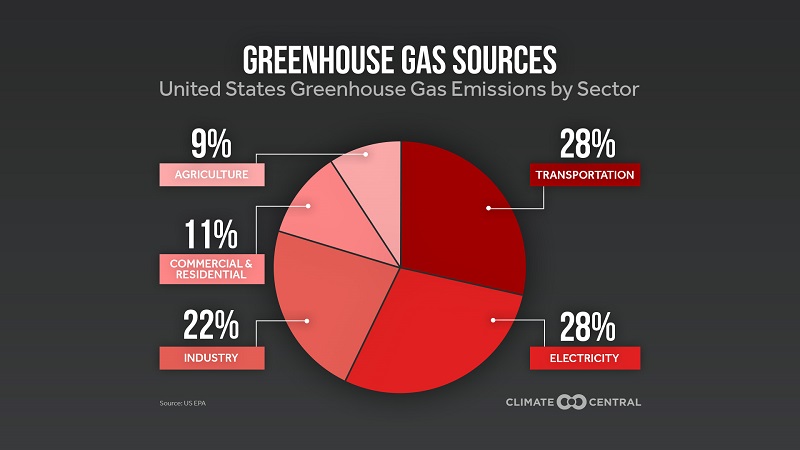 Of those rising emissions, the highest and steepest concentration is that of Carbon Dioxide. Carbon Dioxide is a variable gas, currently comprising about .041% of the atmosphere by volume. This is up from about .028% before the industrial revolution of 1760. The concern with this gas, is that it is increasing rapidly and very efficient at absorbing solar radiation and keeping that heat in the lower atmosphere. This gas normally varies both daily and seasonally due to plants ability to intake carbon dioxide through photosynthesis, but is balanced yearly through this process. Unfortunately, since the post-industrial area, this balance has fallen apart due to the decrease in plant biomass and the increase in carbon dioxide exhaust from the burning of fossil fuels. Increasing this concentration by 68% has taken 180 years, but it is likely to take several hundred years for that concentration to drop back down to around .28%. This is why drastic changes are needed, and carbon dioxide emissions need to be greatly reduced in the next 30 years to keep us from continuing to warm. 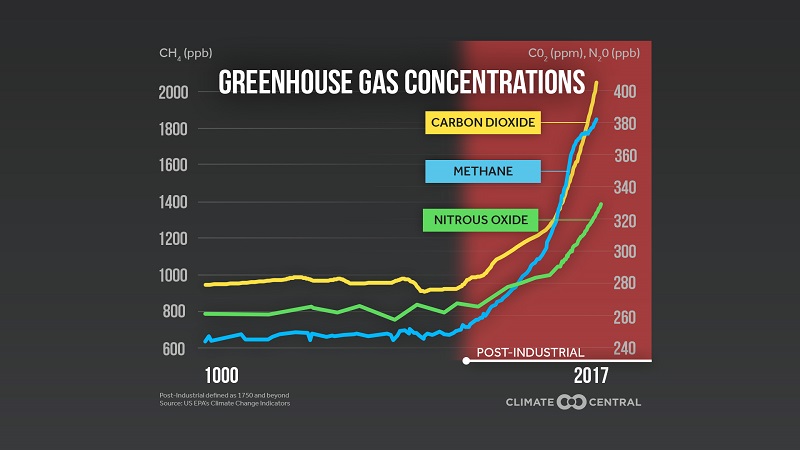 9 out of the hottest 10 years globally have occurred since 2000, with the only outlier in the group happening in 1998. That record goes back to 1881, as we are effectively around 2.0°F warmer than normal. The issue is not necessarily the warming, it is the rate of warming. Just in the last three years, the average deviation from normal is just over 2°F, but before 2015, that number was closer to 1.4°F. 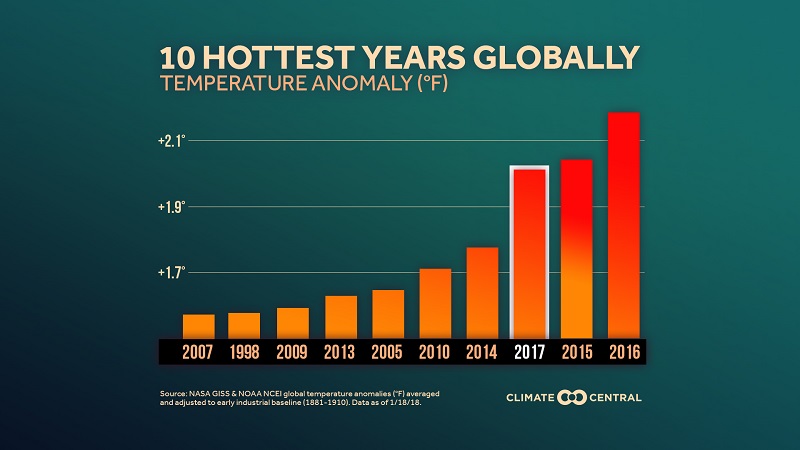 The way we get our energy may be something that needs to be re-evaluated. Where homeowners are now beginning to install solar panels and wind turbines to off-set energy costs, and at times even receiving money from energy companies for them taking their surplus energy. This also alleviates stress on the energy grid, which could help to allow outages to be more isolated and sparse. It also has been leading to the decrease in solar purchase and installation costs, allowing it to be a more viable option to the average homeowner. 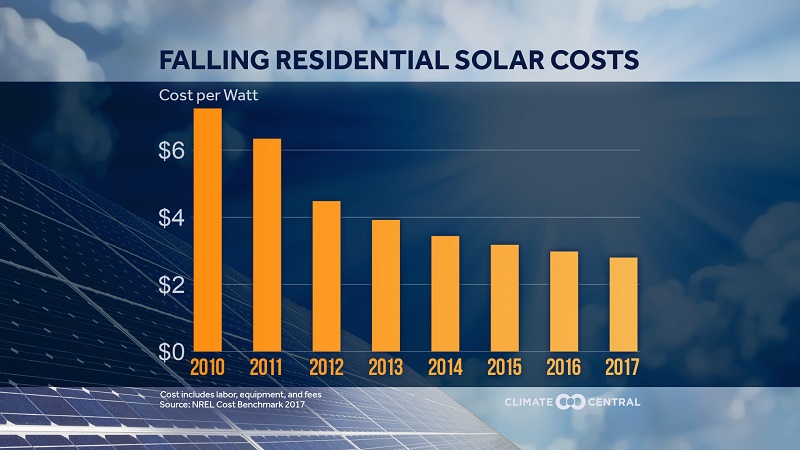