Ed Orgeron says: "We don't think Myles Brennan's going to play." It's not 100% yet, Orgeron says, and a decision will likely be made at the end of the week.

Though nothing is set in stone and a final decision will be made later this week, it seems likely LSU will depend on either TJ Finley or Max Johnson in this Saturday's game against South Carolina. Orgeron said as much during the Wednesday morning conference.

According to The Advocate's Scott Rabalais, when asked what the quarterback is doing right now, Coach O replied, "Rehab, rehab, rehab."

"He hasn't practiced," Coach O continued, "I won't say he won't play. Something miraculous could happen. But right now we're going with TJ or Max." 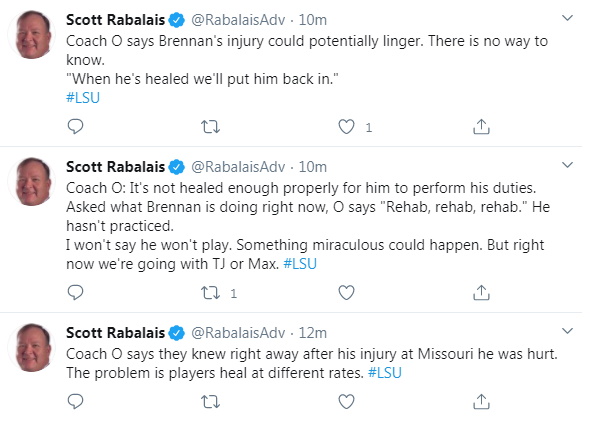 Though both Finley and Johnson are freshman, Orgeron has confidence in their abilities.

"They both had fantastic weeks," Orgeron said of Finley and Johnson earlier this week. "Both of them are impressive."

While they step up to the plate, Brennan will be allowed to heal from a lower-body injury sustained during LSU's Oct. 10 loss to Missouri.

Earlier this week, Coach O said Brennan's injury was so severe that he wouldn't have been fit to play against Florida last week, even if the game hadn't been postponed due to COVID concerns.

If Brennan isn't cleared to take to the field this weekend, it's likely his absence will be felt.

According to ESPN, Brennan's 1,112 passing yards ranked 12th in the FBS prior to last weekend's games. This season, he's thrown 11 touchdowns and three interceptions.

In 2019, Brennan's best overall game was a face-off against Northwestern State, with Brennan going 8-of-9 for 115 yards.

This Saturday, LSU's game against South Carolina begins at 6 p.m. in Tiger Stadium.