Clouds to move out this weekend, cold front to move in next week

After days of dreary conditions, a return of sunshine is around the corner. It looks as though an autumn cold front will arrive just in time of October.

The Next 24 Hours: Trailing cloud cover will start to break from west to east overnight as the remnants of Beta pull away to the northeast. Low temperatures should be able to dip into the upper 60s in response to light, west winds. Some sunshine is expected to crack through the clouds on Friday with high temperatures in the low 80s.

The *COASTAL FLOOD ADVISORY* continues through Friday morning for Ascension, Livingston and Tangipahoa Parishes as nearshore areas could experience tides and water inundation 1 to 3 feet above average.

We don't normally make much of a light, northwest breeze but this is very good news for areas around Lakes Maurepas, Pontchartrain and the lower Amite and Tickfaw Rivers. Losing the sustained southeast wind will finally allow the 1-4 feet of water inundation to subside. #LaWX pic.twitter.com/vSZGqGcdIH

After That: This weekend will feature a pair of partly sunny days with just a stray shower or thunderstorm possible during the afternoons. Temperatures will be seasonable with highs in the mid to upper 80s and lows in the upper 60s. The first of two cold fronts pegged for next week will push through the area on Monday evening with a few showers and thunderstorms. Temperatures will tumble 10 degrees from average behind this boundary. A secondary, reinforcing front will pass Wednesday night to drop readings perhaps another 5 degrees. Starting on Tuesday, expect a few days with highs in the 70s and lows in the 50s, maybe even some low 50s after the second front by the end of next week! Indications from the Climate Prediction Center are that the cool air will hold even beyond the 7-day Forecast. 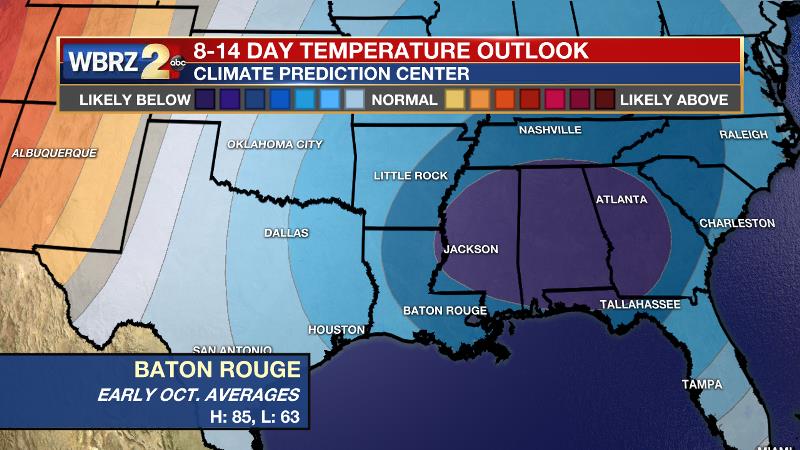 The Tropics: The Atlantic Ocean, Caribbean Sea and Gulf of Mexico are now quiet. No new tropical development is expected over the next 5 days.

The Explanation: Friday and into the weekend, the weather will trend toward normal for late September. A weak upper level trough in the wake of Beta will remain centered over the region allowing some clouds to mix into skies. However, the exit of a tropical air mass should leave conditions too dry for anything but a stray shower. A longwave trough dipping into the southeast U.S. will absorb this trough by Monday and drive a cold front through the area during the evening hours. Model guidance is producing some showers and thunderstorms but the atmosphere will be rather dry so little more than isolated coverage is expected right along the boundary. Thermometers will drop several degrees behind the first front with a taste of fall temperatures arriving on Tuesday. A deeper upper level trough will dig into the Eastern U.S. Wednesday and Thursday sending a second front and even cooler air into the region to end the week. Some low temperatures in the low 50s are possible by Thursday or Friday.