A frontal boundary spanning from the Southern Plains to the Mid-Atlantic is likely to support unsettled weather for a large part of the eastern half of the country during the first week of May. An upper level trough over the Northwest will cause disturbances and surface low pressure systems to interact with this front. Rounds of heavy precipitation will result with large swaths of 3-6 inches of rain through May 5. There is a risk for heavy precipitation from the Central Plains to Mid-Mississippi River Valley late next week.

As for the local forecast, this setup should result in lower chances for severe weather. However, the runoff from rain up north will continue to keep the Mississippi River high. In fact, model guidance shows the gauge at Baton Rouge to be steady or rising through the first two weeks of May. 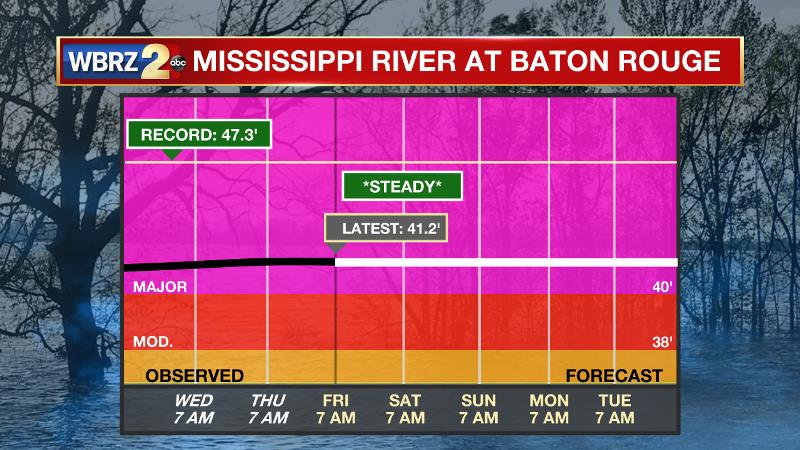 As of Friday, April 26, major flood stage continued with a level of 41.2’ in the Capital City. Peaking at 44.1’ on March 19, the river set its seventh highest recorded crest at Baton Rouge. In addition, at 111 days, this location has been above flood stage for the third longest period on record. By Tuesday, that streak will move into the second spot. 136 consecutive days would make a new record and that mark seems very possible. Records for this statistic are somewhat vague and checkered, only kept for landmark events since the levees were constructed. Our database on this are from collaboration with the Lower Mississippi River Forecast Center.

The high water is primarily an issue for river traffic and river islands, although some inundation will continue unprotected low-lying areas. The city of Baton Rouge and the main LSU campus are protected by levees up to 47 feet. Some soggy areas and seepage may be noted due to the long duration of high water placing pressure on the levees. As some of the Mississippi River diverts into the Atchafalaya River, gauges at Krotz Springs and Morgan City will stay high as well. This creates backwater flooding in parts of Assumption Parish in areas such as Stephensville and around Lake Palourde. Like Big Muddy, this is expected to be a prolonged event but is not uncommon for the time of year. Read more HERE.