Another round of cool air arrives late tonight

Tonight and Tomorrow: Expect mostly clear skies overnight with lows around 44. It will be a chilly start tomorrow morning, so a light jacket will be needed. We'll have plenty of sunshine around on Monday, but with cool, dry air in place, high temperatures will struggle to get out of the mid 60s. 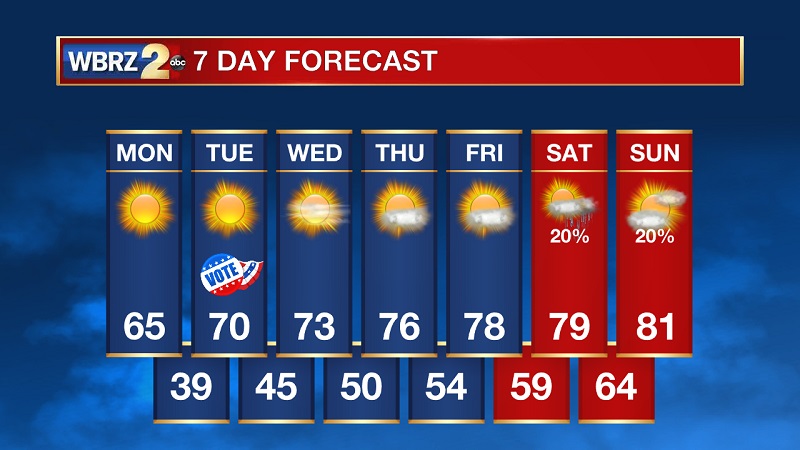 Looking Ahead: Another re-enforcing shot of cool air will arrive tonight, with the passage of a cold front. This frontal boundary won't bring any precipitation with it. It will deliver some of the coolest air we've seen yet this fall season. On Tuesday morning, locations along and north of I-12 will likely see lows in the upper 30s. Locations south of I-12 will be in the lower 40s. Our next chance for rain will arrive next weekend due to added moisture across the region. Rain coverage may have to be increased the closer we get to the weekend. 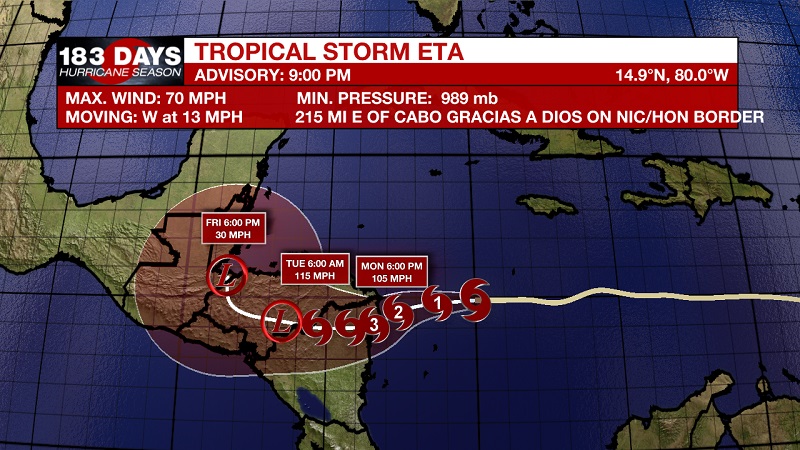 Tropical Depression 29 formed in the central Caribbean Sea Saturday morning and has now strengthened into Tropical Storm Eta. As of the 9pm advisory, max winds are at 70 mph, moving west at 13 mph. Eta is forecast to reach Central America as a Category 3 hurricane on Tuesday with 115 mph winds. This would make Eta the 5th major hurricane of the season.

Eta will either dissipate over Central America or have the potential to re-emerge over parts of the Caribbean. Right now, long range guidance models are all over the place, but they do point to the possibility of Eta (or remnants of) re-organizing over the northern Caribbean. This will be something to keep our eyes on, but nothing as of now shows any threat to Louisiana.

Tropical Storm Eta is the 28th named storm of the season, and now ties the 2005 record of most named storms in a season.