An active storm pattern will carry into early next week. Temperatures will stay above average.

Today and Tonight: A weakening front will work with daytime heating and cause isolated to scattered showers and thunderstorms to remain in the forecast for Friday. However, it will not be as active as Thursday with around 40 percent coverage in measurable rain expected. Areas south and east of a line from McComb to New Roads have the best chance. High temperatures will warm a bit more in the absence of a daylong deluge and get into the upper 70s. Overnight will be mostly cloudy and foggy with lows in the mid to upper 60s. 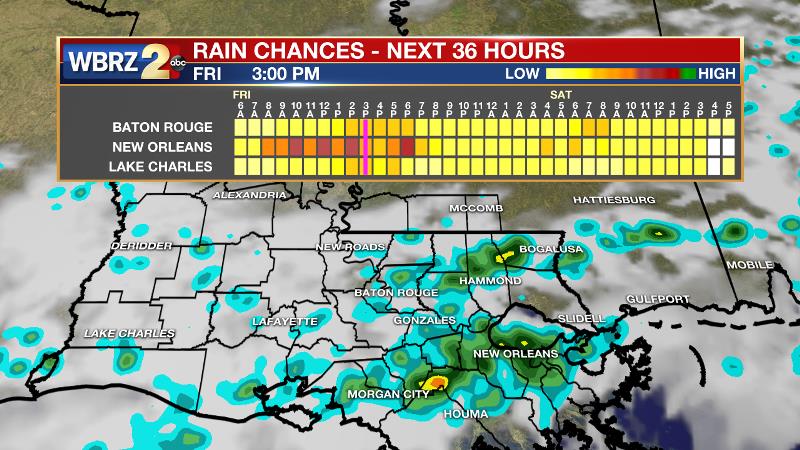 Up Next:  Saturday looks like it will bring a relative lull in the action with some sun and warm temperatures. A stray shower or storm remains possible, especially in southwest Mississippi. A strong system will plow through the area Sunday with another threat of severe storms and heavy rain. Actually, that one looks as though it will pose a greater risk for severe weather than Thursday. Once the associated front passes on Monday night, a run of quiet and warm weather will follow. Noting average highs and lows of 77 and 54 respectively, expect above average temperatures through the middle of next week. 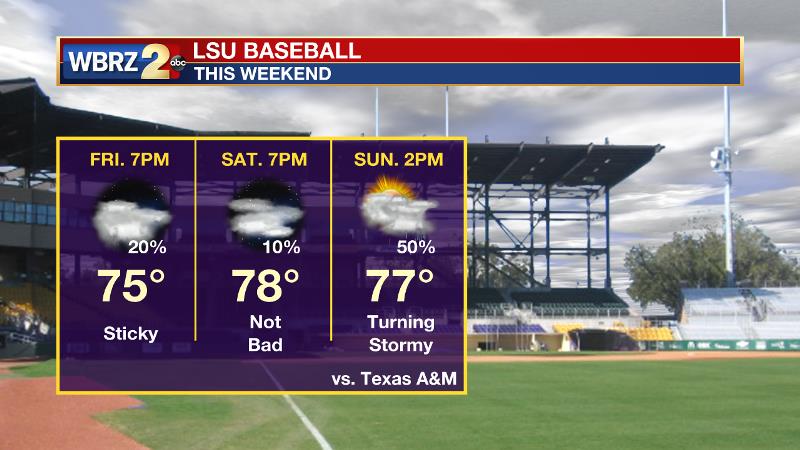 The Mississippi River: At Baton Rouge, major flood stage continues with a level of 42.2’ as of Friday morning. Peaking at 44.1’ on March 19, the river set its 7th highest recorded crest at Baton Rouge. In addition, at 90 days this is now the 4th longest period above flood stage. Due to river flooding and drainage north of the area, runoff will keep the river high for many days to come. The high water is primarily an issue for river traffic and river islands, although some inundation will continue unprotected low-lying areas. The grounds of the older part of Louisiana State University's campus become soggy. This includes the area around the Veterinary Medicine building, the Veterinary Medicine Annex, the stadium and ball fields. The city of Baton Rouge and the main LSU campus are protected by levees up to 47 feet. Some seepage may be noted due to the long duration of high water placing pressure on the levees. Water from the extensive Missouri River flooding across the Upper Midwest will not reach Baton Rouge until April and the Mississippi River is expected to have fallen some by that time. As some of the Mississippi River diverts into the Atchafalaya River, gauges at Krotz Springs and Morgan City will stay high as well. Like Big Muddy, this is expected to be a prolonged event but is not uncommon for the time of year. Read more HERE. 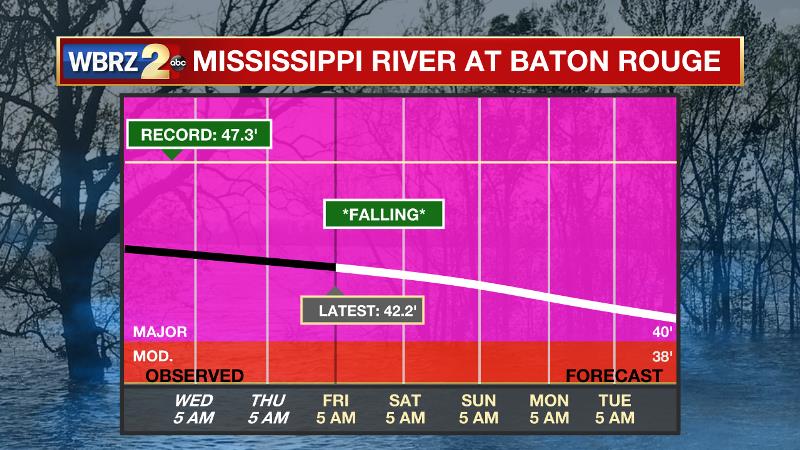 A lingering front will remain draped across the 13 Parish, 3 County forecast area on Friday. Some weak disturbances zipping through the upper levels will aid this boundary in producing scattered showers and thunderstorms. Enough energy remains in the atmosphere for any thunderstorm to produce downpours. There will be plenty of breaks in the activity and do not expect a full day washout like Thursday. Overnight, the front will begin to lift north and open the door for more Gulf of Mexico moisture to surge northward. This advance will lead to more widespread fog formation on Saturday morning. With the front north and the upper levels quieter due to a weak ridge, some sunshine will breakout and very few showers will be able to develop. By Sunday, a strong shortwave trough will move into Texas. An associated surface low and front will move into the area during the afternoon and evening hours. Much more instability will be available for this system when compared to Thursday’s. In fact the instability readings are going to be quite high for the time of year. Wind shear will not be as high as Thursday but will be sufficient for severe thunderstorms. As a net, these parameters combine to be greater than Thursday. Meanwhile, moisture will be abundant and the upper and low level features will generate plenty of lift. The stage certainly looks set for both severe thunderstorms and heavy rain. The Storm Prediction Center has already placed the entire state of Louisiana and most of Mississippi in a 2 out of 5 “slight risk” for severe weather but this risk area could be adjusted and upgraded to a higher category as we get closer. It is unclear what time the system will move through the area on Monday but it is expected to linger long enough to mention scattered showers and thunderstorms on Monday too. Drier conditions will take hold Tuesday through Thursday morning with well above average temperatures. Expect highs to surge into the low to mid 80s with lows in the upper 50s and low 60s.