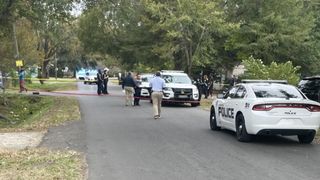 Officers confirmed one person was injured in the shooting, which happened shortly after 1 p.m. Thursday. Police say the argument is believed to be a domestic situation.

Witnesses said the shooting stemmed from an argument earlier in the day. A woman reportedly left, came back with a gun and shot someone.

The victim, a man, is expected to survive.

Officers have not announced any arrests or identified anyone involved as of Thursday afternoon.