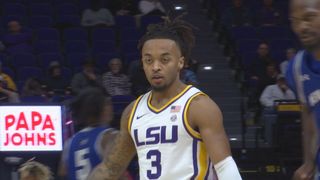 BATON ROUGE - It was the LSU basketball team's best game of the season tonight against UNO, with a dominating effort on both sides of the floor.

The Tigers shot better than 50 percent offensively and hit 12 threes. On the defensive end, they created 23 turnovers, which led to 22 points. The LSU bench lead the way tonight with 51 points.

“Really proud of our players and the progress that we made. I know the score turned out well for us, but what I was most pleased with was that I thought we were more of a team today. Watching the celebrators celebrate each other's success, that is something we really want to continue to build. I’m really fired up for Derek Fountain and Cam Hayes. They were fantastic tonight and I don't think it was an accident. They've had great practices, they have shown great leadership, and I think both were very prepared for when their opportunity came. Their impact on the game was obviously huge,” said head coach Matt McMahon.

LSU improves to 3-0 on the season and will now get ready for the Cayman Island Classic next week. They will open up the tournament with Illinois State on Monday at 10 a.m.