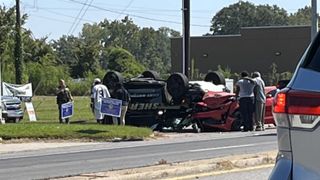 BATON ROUGE - A sheriff's deputy was taken to a hospital after their vehicle flipped over along Airline Highway late Friday morning.

The crash was reported shortly after 11 a.m. at the intersection of Airline Highway and Foster Drive. Sources said the deputy involved was taken to a hospital before paramedics arrived.

No one else was seriously hurt in the crash.