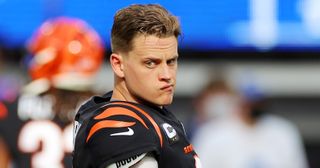 Ian Rappoport of the NFL Network reported Tuesday afternoon that Burrow will have an appendectomy right before training camp starts with the Bengals.

From Inside Training Camp: #Bengals QB Joe Burrow came down with appendicitis and now is having his appendix removed. The timing... could be a lot worse. pic.twitter.com/IAzg3xzD6T

Burrow helped lead the Bengals to the Super Bowl in just his second season, a game they lost to the Los Angeles Rams.

Cincinnati is coming off its first AFC championship and Super Bowl appearance in 33 seasons. Last year, Burrow completed 70.4% of his passes for 4,611 yards, 34 touchdowns and 14 interceptions.