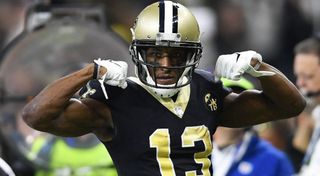 NEW ORLEANS - The Saints placed WR Michael Thomas and DE Marcus Davenport on the PUP list to start camp. Thomas is still recovering from his ankle injury, but there is optimism that he will be cleared soon. As for Davenport, he's recovering from a shoulder surgery and amputated half pinky.

To be clear on the rules for the PUP list, a player can be moved off the PUP list to the active roster at any time prior to the start of the regular season. But a player cannot be placed on the PUP list once he has taken the field for a practice or game.

Thomas has played just seven games since 2020, missing the entire 2021 season. The last time we saw the wideout completely healthy was back in 2019, when he won the Offensive Player of the Year, breaking the NFL's single-season record for receptions 149 and leading the league in receiving yards 1,725.

The Saints veterans report to training camp on Tuesday.