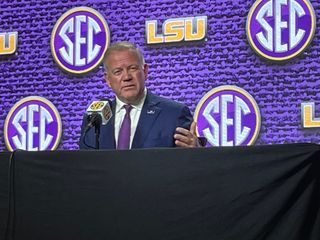 Brian Kelly and the LSU Tigers were the talk of the town on the first day of SEC Media Days in Atlanta on Monday.

Kelly is one of two new coaches in the SEC this season and most have not given Kelly a shot at being successful in the South let alone at LSU.

Thanks to BJ, Jack and Mike for representing LSU in Atlanta. All three did an outstanding job. pic.twitter.com/XX4XBOSuK3

Since arriving on campus late last year, Kelly has been criticized for his accent, dancing and general fit at LSU.  But on Monday Kelly fired back, flashing that poise and command that he's developed as a signature trait.

"I think fit is about the ability to run a program at the highest level. I've done it for 32 years," Kelly said on Monday afternoon at the main stage podium.

"I've had success at Notre Dame, Cincinnati, Central Michigan, wherever I've been. So running a program and then player development, I think those are the most important things. I don't think that needs to be geographical in a sense. I've gotten to love where I'm at in Baton Rouge. I love the people. They love football. They love family. They love food. That fits me really well. I guess I should have been in the South all along."

Kelly is clearly getting more and more comfortable every time he steps in front of a camera and microphone and having a chance to address some of his critics face-to-face was just another step for the rookie SEC coach to prove he has what it takes to belong to the nation's best football conference.

“No one has given me any documentation that were behind, I feel comfortable that we’re as competitive as anyone else, I don’t feel like we’re being outbid, I don’t think that’s the point anyway, I don’t feel hamstrung” Brian Kelly on NIL #SEC #LSU pic.twitter.com/cb4IJhV25H

Kelly touched on a number of notes with his Tiger team, adding that he feels like LSU is on pace with the rest of the country when it comes to NIL, saying he welcomes eventual SEC members Texas and Oklahoma and filling everyone in on the Tiger quarterback race.

"We're really going to have to set the offensive structure and its installation to the skill set of the particular players," Kelly said of the ongoing quarterback competition between veteran Myles Brennan, new transfer in Jayden Daniels and upcoming Garrett Nussmeier.

“Not a tactical advantage to who’s going to start at quarterback, so we’re not going to announce who it will be after three days, but not an advantage to hold it back” - BK on QB battle. pic.twitter.com/vNPaV3RPwf

Kelly listed three main attributes that they will look at when deciding a starter for the opener against Florida St.

LSU will report for Fall camp starting the first week of August and they open the season against Florida State in the Superdome on September 4.