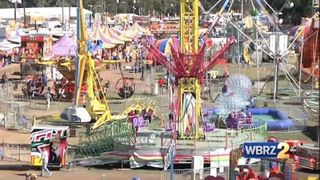 GONZALES - After more than 50 years of hosting the Greater Baton Rouge State Fair in the capital city, organizers plan to move the event to neighboring Ascension Parish.

Officials in Ascension Parish said the plan is to hold the fair on the grounds of the Lamar Dixon Expo Center starting in 2022.

"We're very impressed by the infrastructure they have that will allow us to do things we've never done before. We can move into rodeos. We can do all kinds of things related to agriculture, and as a state fair, we have to do that," GBR State Fair President Cliff Barton said.

The move won't come without hang-ups. The entrance to the Expo Center is at an intersection with no lights that will have to facilitate around 100,000 attendees.

"It's going to be a task, no doubt about it. We realize, from the law enforcement standpoint, as far as traffic goes, we know it's going to be one hell of a task, but can we do it? Of course, we can do it! We got two wonderful agencies, two professional agencies that know what to do about traffic," Gonzales Mayor Barney Arceneaux said.

The fair has been at a handful of locations over the past 57 years, all in East Baton Rouge Parish. Its current location at the BREC Airline Highway Park/Fairgrounds has hosted the fair since 1973.